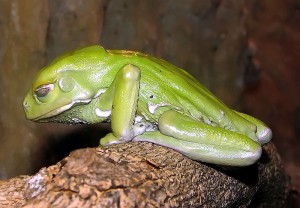 A pair of pony-sized frogs leap headfirst into massive trees, which splinter and fall after being struck by the creatures’ bony heads. Seeing a lone orc, the two frogs croak at each other and turn their attention to it. They maneuver into position on opposite sides of the orc, then propel themselves at the hapless humanoid, and leave nothing but a pulpy mess when they meet.

Carnivorous beasts typically use claw and fang to kill and eat their prey, but the metoprana lacks these features. Instead, the creature has evolved bony plates, the most prominent one in its forehead, which it uses to smash its victims, often in tandem with a mate or a tight-knit family group. The giant frog’s bony plates allow it to withstand any bludgeoning damage resulting from their primary method of attack…

TACTICS
Before Combat Two or more metoprani position themselves on opposite sides of a victim in order to make use of their tandem smash.

During Combat Metoprani focus their destructive attacks on one target until they either kill it or realize they cannot harm it. On the round following an attack, the creatures leap away to ready their next attempt. Advanced metoprani develop Spring Attack, which allows them to attack every round.

Morale When reduced to one metoprana or when its prey proves resilient, the giant frog hops away in retreat. If cornered, a solitary metoprana tries to push its attacker away using bull rush to get room to escape.

Tandem Smash (Ex) If more than one metoprana succeeds at a bull rush attempt against the same target in the same round, the target takes an additional 2d8+6 damage. The creature is stunned for 1d3 rounds (Fortitude DC 16; Strength-based).

Metoprani smash everything in sight, driving most creatures away from their lairs. These amphibians thrive anywhere with a suitable temperature but prefer tree-filled areas, where they engage in competitive—though friendly—destruction. Canny loggers know where metoprani lair and benefit from hard work already done for them… after the giant frogs leave the area. If a squad of the beasts hops into town, they lay waste to buildings and structures while reducing any resistance to bloody smears.

Arcane spellcasters and militant druids summon metoprani to besiege structures. These summoned frogs must be placed in areas without any other living creatures, since metoprani attack them in preference to bashing into buildings. Most other creatures give them a wide berth, though, so this doesn’t present a problem.

Unusually for amphibians, metoprani form family units that work together to take down prey and protect each other. They croak and cheep to coordinate their attacks—a non-metoprana who can figure out the correct croaks (Knowledge (nature) DC 20; Perform (vocal) DC 20 to mimic the sounds) can integrate into a squad and potentially lead it. When a metoprani squad has down time, the members leap into each other to practice their tandem attacks. The creature is immune to damage from such practice sessions.

Metoprani live for 5 years typically, but large specimens living up to 15 years have been recorded. The creatures find a body of water to lay their eggs, which hatch into tadpoles that must live in water for 4 months before completely developing lungs and legs.

During this water-bound stage of development, the parents take turns watching over their young while the creatures grow their bony plates, which they use to smash small fish. Cooperative younglings thrive much more than their competitive siblings, encouraging family cohesion.