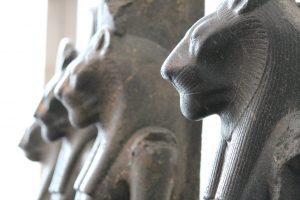 In the Southlands, the Dwarves of Dwergvald differ from the traditional dwarven ideal. Less martial, these dwarves focus on craftsmanship and community. This isn’t to say they don’t have warriors or martial elements—far from it! But the God-Kings of Nuria-Natal strongly patronized their guilds, and in doing so, they created relationships between the greatest sculptors and stonecarving artisans of the dwarven culture and the River Kingdom that still exist. Additionally, the dwarves suffered greatly when a terrible cataclysm tore an immense hole in Midgard, obliterating much of their homeland. Their armies had heavy casualties fighting a rearguard action as the rest of the survivors retreated to the current warren-cities of Dwergvald. A result of this event also created a custom of developing tunnel-fighters and explorers who are dedicated to recovering anything salvageable from the ruins.

Arcane Sculptor: The artisans of Dwergvald discovered methods for animating their magnificent statues, infusing them with an invigorating force that bonded them to their creators. Now the Arcane Sculptors serve many roles in Dwergvald society, aiding in almost every aspect where constructs can keep dwarven lives out of harm’s way. The archetype is not limited to dwarves, however. Arcane Sculptors simply require a dwarven sponsor to attend the Brotherhood of the Chisel’s school.

Deep Explorer: Those who wish to reclaim the sunken galleries of Haldaheim and the treasures lost to the Great Sinkhole become adept at spelunking and experts on the strange and terrible creatures lurking within. In other parts of the Southlands, deep explorers might lead expeditions into titan ruins or glittering cavern systems in search of adventure.

Tunnel-Fighter: In the course of the exodus from Haldaheim, the dwarves of Dwergvald learned lessons of tunnelfighting paid in blood. They brought these lessons back to the survivors and spread the experiences among the members of the Brotherhood of the Axe. Many young dwarves join their number, but these dwarves also tend to venture out in search of adventure, keeping the numbers of tunnel fighters moderately low. Members of other races have been known to seek out such training as well, especially in regions where close quarters combat is commonplace.