Skip to content
Home / Delve into the Depths in the Kobold Blog / Snakes and Scorpions: Four Menacing Pulp Monsters 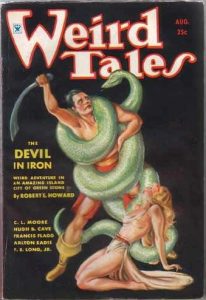 “… and now from an opening on one side came a silent writhing horror that reared up and glared on the intruder with awful luminous eyes; a serpent twenty feet long, with shimmering, iridescent scales.” —Robert E. Howard, “Black Colossus”

The days of high adventure are full of high-risk, high-reward situations. And nothing says “risky” quite like the business end of a serpent’s fang or a scorpion’s tail. Indeed, snakes and scorpions have appeared in literature throughout history as malevolent protectors—ill-willed living traps put to insidious use by keen and cruel minds. The legendary Book of Thoth was said to be guarded by snakes and scorpions. To wit, the ancient Egyptian tale of Setne Khamwas and Naneferkaptah details six miles of “serpents, scorpions, and all kinds of reptiles” surrounding the gold box housing the book. (Of course, Naneferkaptah’s curse is more deadly to Khamwas than the legion of venomous vermin, but I digress). More famously, pulp yarns like the weird fiction of Robert E. Howard and the stop-motion worlds of Ray Harryhausen have served as terrific inspiration for realizing these creatures in our own RPG campaigns.

I’ll never forget the first time I saw Harryhausen’s Giant Scorpions come to life in Clash of the Titans. And it’s no secret I’m a sucker for Howard’s Hyborian Age and the serpent-slaying exploits of Conan the Barbarian. Quite often, the dangers of the natural world (albeit a primeval one) can prove as deadly to would-be heroes as those of the supernatural. You don’t necessarily need “high fantasy” to capture that sense of high adventure Howard so effortlessly engendered with his stories. But when it came to populating my Pathfinder game with a menagerie of these Stygian menaces, I found a snake-sized hole in my heart that needed filling.

There are only a half-dozen entries for snakes in Pathfinder RPG Bestiaries 1-4 (including the rather ineffectual viper familiar and the nebulous snake swarm). Seven scorpion entries give our arachnid friends a slight edge in numbers, but—due to the larger size of many of these critters—we have a relatively short list of snakes and scorpions from the official rules set that could be encountered with any sense of “natural” regularity. Also, examining the list of poisons on pages 557–560 of the Pathfinder Core Rulebook yields two samples that match our specimens: Black Adder Venom and Large Scorpion Venom. With these factors at-hand, I set about to take the Bestiary‘s advice and devise some variants that would help me further evoke that Age undreamed of, when shining kingdoms lay spread across the world like blue mantles beneath the stars…

This giant venomous snake is known as the most lethal serpent from the fiend-haunted swamps of its namesake—one bite from the Zingaran viper can kill a healthy man in mere seconds. A dose of its viscous green venom is known to fetch as much as 2,500 gp on the black market.

The squat, diamond-shaped head and puffed neck of this loathsome serpent betray its innocuous appearance as a peculiar yellow band with brownish speckles.
XP 600
hp 13 (Pathfinder RPG Bestiary 255; Same statistics as Venomous Snake, except as below)

This venomous snake variant—sometimes known as the “speckled band”—is native to the marshes of Vendhya and is simultaneously feared and prized for its potent paralytic venom. A dose of swamp adder venom could command 3,000 gp or more on the black market.

“In his extended hand something alive writhed and slavered. No tricks of shadows this time. In his naked hand Thugra Khotan gripped a black scorpion, more than a foot in length, the deadliest creature of the desert, the stroke of whose spiked tail was instant death.” —Robert E. Howard, “Black Colossus”

These desert scorpions can be identified by their hefty physique and their aggressive behavior. Considered one of the most dangerous species of scorpions in the known world, the Stygian fat-tailed scorpion brings instant death to those who feel the terror of its toxic sting. A dose of fat-tailed scorpion venom is worth 4,000 gp or more.

This aptly named arachnid hunter is an offshoot of the more commonly known giant scorpion. Instead of enfeebling its prey, the night scorpion blinds victims with a dose of its crippling poison.

XP 800
hp 37 (Pathfinder RPG Bestiary 242; same statistics as giant scorpion, except as below)

Night scorpion venom is highly prized for its unique properties and can command upwards of 400 gp per dose.