Skip to content
Home / Delve into the Depths in the Kobold Blog / The Con Report: My First Dragoncon 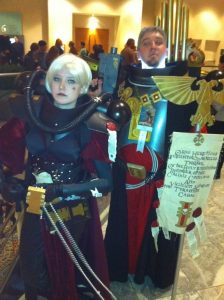 It had always been on the list. Everyone said it was a great time, and I kept saying to myself, “Yeah, one of these years, I got to make my way down to Dragoncon.” After saying that for about 10 years, the stars finally aligned, and I was able to attend this year, both as a guest and an attendee. The flight to Atlanta on Thursday was pleasant enough and not really all that expensive, seeing as it is the main Delta hub.

Friday morning, I got to the convention bright and early, and it became immediately apparent that this was not like the other shows that I have attended. Being a veteran of Gen Con and Origins, I have some preconceptions about how the major shows run, but Dragoncon is focused much more heavily on science fiction and fantasy media (and costumes, but more on that later)… 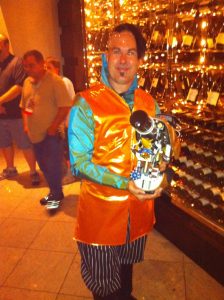 Spread out through four hotels all next to one another, the convention has a very different feel. I got to the gaming area very early and met up with some old friends, picking up my badge and getting ready for the day’s events. I had two games of Pathfinder Society scheduled in the afternoon and was excited to break out my dice. The games ran really smoothly and wrapped up around 10 pm, giving me a little bit to wander the show after hours. It was then that I realized what made Dragoncon truly amazing. The show turns into one gigantic party with nerds of all stripes, mingling together having a truly good time. People watching over cocktails should be a scheduled event. 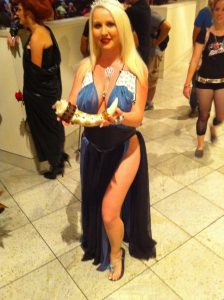 Saturday was for seminars. I started off by giving a quick panel on the Pathfinder RPG. I must admit I was a little intimidated by this one, primarily because it was opposite the costume parade, which had me thinking that I would be talking to an empty room. Let it not be said that there are not hard-core gamers in the Atlanta area. The seminar was packed with standing room only by the end. As it turns out, this would repeat itself for all three seminars that I took part in. I was truly humbled by the number of people who came to see me ramble on, and on, and on.

Outside of my scheduled events, I got a chance to just wander the show and be a nerd, which is something you can easily spend the entire convention doing. I got autographs from some of my favorite actors (Brent Spiner, Michelle Forbes, and Nelsan Ellis) but easily could have spent a few more hours (and hundreds of dollars) getting a lot more. I went to a number of truly entertaining panels, run by stars of the show. The Eureka panel, in particular, was incredibly fun, due in large part to the antics of Colin Ferguson. I wandered the dealer hall and chatted with a few industry friends, and seriously started considering some costume pieces. This deserves a special note. There were times at Dragoncon where I felt out of place for NOT being in costume. That is how omnipresent they are during the show. Everywhere you look you will find a great costume, from the mainstream to the truly oddball. 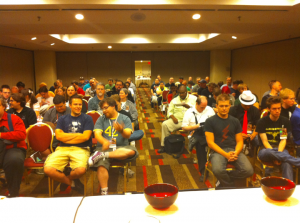 When it was all winding down for me, I have to say Dragoncon exceeded all of my expectations, which were pretty high to begin with. It’s a great show if you like science fiction and fantasy. There is a fair amount of gaming to be had with some truly great gamers. There are more awesome costumes than you’ll be able to remember. But best of all, there is an entire convention full of people having a good time, enjoying their hobby. I can’t wait for next year.

ps, I want to take a brief opportunity here to thank Brooks Banks, Gail Reese, Jon Richardson, Shy Aberman, and Sarah Smith for being such a great bunch of gamers and for convincing me to attend. Finally, James Sullivan is not allowed to play Pathfinder. He knows what he did.

Jason Bulmahn is the Lead Designer of Paizo Publishing, LLC. After having coordinated Living Greyhawk, the world’s largest D&D organized play campaign for the RPGA, Bulmahn joined Paizo Publishing as the Managing Editor of Dragon magazine in 2004. Since then, Jason has published dozens of articles and adventures in Dragon and Dungeon magazines. His RPG design credits include Dungeonscape, Elder Evils, Expedition to the Ruins of Greyhawk, Pathfinder Chronicles Gazetteer, Secrets of Xen’drik, and the Pathfinder Roleplaying Game. His work has earned an Origins Award and nine ENnie Awards.

1 thought on “The Con Report: My First Dragoncon”