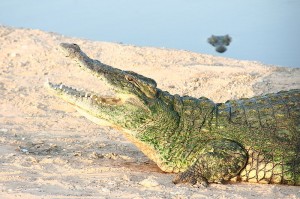 The monstrosity appeared like a 50-ft.-long crocodile careened above the otherworldly battlefield, soaring on rigid leathery wings and coming to an awkward, upright landing among the scattered bodies of angels and fiends like. It charged straight into the celestials’ siege tower, both tails whipping wildly. Belviss fled in abject horror.

Some minutes later, the gnome archivist grumbled to herself, “New experiences! If these are new experiences, I might as well forget it!”

Sovbeks appear to be manifestations of primordial wrath—giant crocodiles walking on two legs with massive pteranodon-like wings sprouting from their back. They delight in destruction: not just the utter annihilation of creatures, but of structures and civilizations, as well…

SPECIAL ABILITIES
Adamantine Fangs (Ex) A sovbek’s claw and bite attacks are as tough as adamantine and ignore 20 points of hardness.

Blasting Bellow (Su) A sovbek can bellow thunderously 3/day as a standard action. This creates a 60 ft. cone of sonic energy that deals 10d6 sonic damage to all creatures and objects. In addition, affected creatures are stunned for 1d4 rounds and deafened for 3 minutes (Fort DC 32 halves damage and negates stun and deafness; Constitution-based). The blasting bellow does full damage to objects, double damage to creatures or objects made of crystal, and ignores hardness.

Rolling Rend (Ex) If a sovbek hits a single opponent with both claw attacks, it tears the victim’s flesh, as with the rend special attack, and throws its opponent to the ground. The sovbek can attempt to trip its opponent as a free action without provoking an attack of opportunity. If the attempt fails, the sovbek is not tripped in return.

Sovbeks appear to be massive crocodiles, standing 30 ft. tall on their rear legs and stretching 50 ft. from the tip of their snout to the tips of their twin tails. They have large, leathery, somewhat stiff wings, reminiscent of pteranodons and other flying reptiles, with a wing span of 40 ft. A typical sovbek weighs close to 16 tons, although rumors persist in the Abyss that several larger specimens still exist.

Sovbeks are foul-tempered fiends, as a rule, distraught over the loss of their master. They are sullen when taking instructions and rarely speak, preferring to growl, but they are reliable in one way—they love to destroy.

Although their origin is uncertain, sovbeks were once the favored servants of the now-imprisoned god of destruction and fury, and they benefited greatly in power and strength from his regard. Over the ages since his capture and imprisonment, however, they have shrunk in stature and potency and have lost much of their cultural cohesiveness and direction. Most sovbeks serve as mercenaries in demonic armies, following the orders of the only other creatures chaotic and evil enough for them to tolerate. They often long for release onto the material plane, where they can vent their hatred on the cities and nations of mortals. In the past, they have come at the behest of their demonic masters, but recently, powerful druidic circles have learned how to summon sovbeks. It is a frightful development.