Skip to content
Home / Delve into the Depths in the Kobold Blog / My First Gen Con: Colin McComb 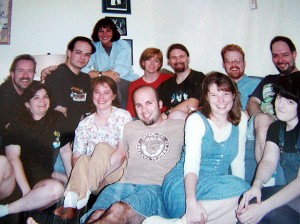 Tell the story of your own first Gen Con (even if this upcoming one is your first), and win big in the My First Gen Con contest!

My first GenCon was in 1991. I had just turned 21, had just graduated from college, and was three months into my first full-time, adult job: a game designer for TSR, Inc. I had just finished my first project (Dragonlance’s “Taladas: The Minotaurs”, with a super-sweet Brom cover), and I had no idea what was in store for me.

Everyone around the office was, to put it kindly, freaking the hell out, and I had no idea why.

When I reached the exhibit hall, that changed in a hurry. The doors opened onto the fabled TSR Castle, the centerpiece of the hall. All around, people rushed to and fro to prepare for the influx of gamers the next day, setting up booths, arranging piles of books, dice, magazines, chain mail… wait, chain mail? Yes. For today, the hall was (mostly) civilized, orderly, and expectant.

The next 4 days were a blur. Because I had hired on too late in the year to be an active part of the developer demo teams, I was given all sorts of duties: book signing line guard, registration, lost and found. Hordes of gamers swept past and through, some of them laughing, some of them scowling… but almost every single one of them glowed with joy.

At last I understood the pre-Con tension at TSR: this was a big deal. This was a destination. This was, for many of our guests, one of the highlights of the year. When it was all over, I realized it was one of mine, too.

The following year, they asked me to spy on Gary Gygax. But that’s a story for another day.

Colin McComb won two Origins Awards for his work with Second Edition Dungeons & Dragons, worked extensively on the Planescape line, and helped create the campaign setting of Birthright. He left TSR to work at Interplay/Black Isle Studios, where he helped design the cult classic computer RPG Planescape: Torment, the post-apocalyptic classic Fallout 2, and other games. Since then, he has worked with a variety of companies including Paizo, Malhavoc Press, and Planetwide Games, and is a co-owner of 3lb Games where he creates mobile applications for kids.