Skip to content
Home / Delve into the Depths in the Kobold Blog / Adorable Creatures: Otterling 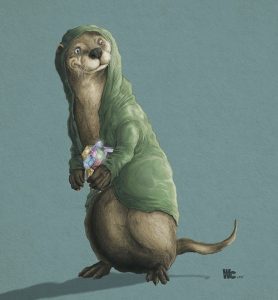 Quick-witted, devious, and ambitious, otterlings are a mischievous race that dwells in riverfront villages. They make natural craftsmen and nimble fighters on the battlefield. Meanwhile their grandiose ambitions often lead them to unlawfulness.

Otterlings are the second race in the Adorable Creatures series, following Garden Gnomes. As natural rogues and wizards, otterlings make powerful allies, often thinking outside the box and having a plan or at least the resources to get them out of any situation. However, their unethical practices and greed can put them at odds with more lawful party members.

For my campaigns, I wanted to create a culture of people who make their living off the black market or else are known for raising rogues and wizards. Though evil, otterling settlements see the value of good business and rarely attack good-doers on sight. This allows DMs to include otterling villages in good campaigns where party members can track down an enemy on the run, find new magical items, or find information on the shadier corners of the world.

For the race, I naturally drew inspiration from otters. They have a bonus in Swim checks and a penchant for crafting (otters are among the few animals to use tools). As otters have historically been used to help fishermen catch fish, I felt it would be an interesting addition for otterlings to have once been enslaved by humans. Thus otterlings are not prone to trusting humans, a race that is typically seen as a safe choice in character creation.

To learn more about otterlings, download the free PDF!

Michael Galvis lives on the Internet, as does this blog post’s artist Clay Chastain.