Skip to content
Home / Delve into the Depths in the Kobold Blog / Shadow Claw: A Guard Animal Gone Wrong (Part 2 of 2) 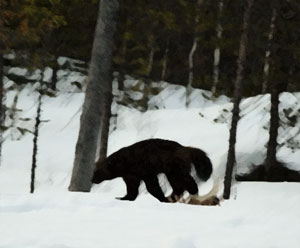 A cunning, vicious beast, the shadow claw strikes fear into the hearts of travelers everywhere. Originally an attempt by a cabal of wizards to engineer the perfect guard animal, the shadow claw now stands as an example of the consequences of hubris. See more about the shadow claw before diving into its statistics and tactics.

The shadow claw can see invisible creatures and objects.

Damage: 2d8 + 5 damage, or 4d8 + 5 while the shadow claw has combat advantage against the target.

Damage: 3d8 + 5 damage, and the shadow claw gains a +2 bonus to AC and Reflex until the end of the encounter.

Trigger: The shadow claw is hidden and loses cover or concealment against an enemy.

Effect (Immediate Interrupt): The shadow claw makes a Stealth check. If its check beats the triggering enemy’s passive Perception, it remains hidden from the enemy, and until the end of its next turn it can remain hidden from the triggering enemy without needing any cover or concealment. The effect ends if the shadow claw moves more than 2 spaces in 1 round or if it makes an attack of any kind.

If a shadow claw pack employs direct assault tactics, they bum rush the enemy, using chomp and tear at the first opportunity. At least two shadow claws attack each opponent, hoping to bring as many down as soon as possible. After this, they use tooth and claw attacks until chomp and tear recharges, concentrating on killing one opponent before moving on to the next.

When employing ambush tactics, shadow claws position themselves so that they surround their unsuspecting prey. They then move closer until they’re in range to provide each other with combat advantage, with at least two shadow claws attacking a single opponent, aiming to kill as many members of the opposition as possible in the first turn. They employ chomp and tear to cause the most damage possible, then resort to tooth and claw attacks until chomp and tear recharges. Only when their initial target is dead will they move on to the next one.

Shadow claws never fight to the death. If bloodied, a shadow claw falls back and uses ambush attacks as described above, regardless of the strength of their opposition. If reduced to one-quarter of its hit points, the shadow claw retreats from the fight entirely. If over three quarters of the pack retreats, any remaining shadow claws flee the fight.

A character knows the following information with a successful skill check.

Nature DC 10: Shadow claws are vicious pack predators that pose a serious danger to anyone who runs into them.

Nature DC 15: Shadow claws show an unusually keen ability to size up civilized (in other words, not wild animal) opposition based on which weapons and armor foes wield and wear.

Streetwise DC 15: Every settlement situated near a shadow claw habitat posts a sizeable bounty on the heads of these creatures.

Arcana DC 20: The shadow claw is a magically enhanced dire wolverine, the end result of a project intended to create the perfect guard animal for a cabal of wizards.

Arcana DC 20 or Nature DC 25: Any breeding between a shadow claw and a normal dire wolverine results in the offspring being shadow claws.

Shadow claws fight alongside each other only—they’re too predatory to fight with any other creatures.