Skip to content
Home / Delve into the Depths in the Kobold Blog / Shades of Magic: The Necromancer’s Toolkit 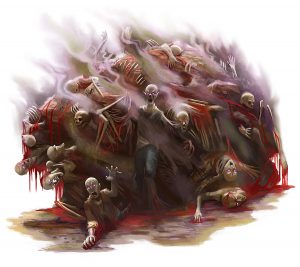 Necromancy is a potent force, and while many spellcasters might long for its power over the dead, the wise know not to meddle with what lives in the shadows. Despite this magic’s reputation, though, it can be used to create items of great potency. Those who take up these tools may even use them to battle the scourge of undeath… if they so choose.

Often given to the grim enforcers of great necropolises, these weapons can reduce the walking dead to splinters with a single strike. You gain a +1 bonus on attack and damage rolls made with this weapon, and that bonus increases to +3 against undead. If an undead target does not have vulnerability to bludgeoning damage, treat it as having that vulnerability for all attacks made with the bonebreaker mace. If an undead target already has vulnerability to bludgeoning damage, deal an additional 1d6 of radiant damage. 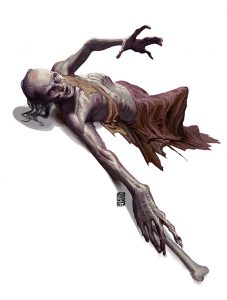 These amulets tend to be made from the skulls of grave rats or from scrimshawed bones of the ignoble dead. While wearing this amulet the wearer has resistance to Necrotic damage.

Made from woven lead and silver, these rings always seem to fit on the hand’s smallest finger. As the moon is a dull reflection of the sun’s glory, so too is the power within this ring merely an imitation of the healing energies that can bestow true life. The wearer can activate this ring three times per day as a bonus action to cast false life on themselves. This ring acts as a 2nd-level spell slot, granting 1d4 + 9 hit points.

It’s custom in many faiths to weight a corpse’s eyes with pennies so they have a fee to pay the ferryman when he comes to row them across death’s river to the afterlife. Ferryman’s coins, though, ensure the body stays in the ground regardless of the spirit’s destination. These coins, which feature a death’s head on one side, and a lock and chain on the other, prevent a corpse from being raised as any kind of undead. The coins, once they are placed on a corpse’s closed lids and activated with a simple prayer, cannot be removed unless the person is resurrected (in which case they simply fall away), or someone makes a DC 15 Strength check to remove them. Yanking the coins away does no damage to the corpse. 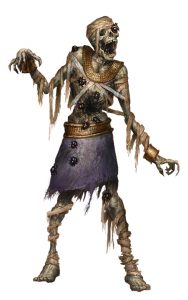 No sane man would willingly put a noose around his neck, but certain hemp ropes used in the execution of final justice possess the power to affect those beyond the reach of normal magics. When held in your hand you may 3 times per day, as an action, cast hold person. Unlike the standard version of this spell, though, the magic of the Handman’s Noose only affects undead.

Aside from being carved from bone, these combs are beautiful examples of functional art. Three times per day they also allow the wearer to cast invisibility as an action. Unlike the standard version of this spell, though, the wearer is only invisible to undead creatures. However, the wearer can attack creatures who are not undead (and thus unaffected by the spell) without breaking the effect. Casting a spell breaks the effect as normal.

The world of the living is a strange place, but the land of the dead is stranger still. And those who dabble in it tell tales of other, even more powerful relics… but will you be brave, or foolish, enough to seek them?

2 thoughts on “Shades of Magic: The Necromancer’s Toolkit”