Skip to content
Home / Delve into the Depths in the Kobold Blog / Random Encounters: Out of the Rain (Part 2) 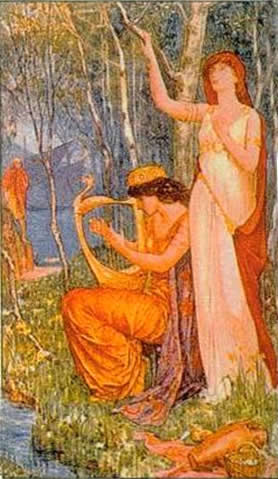 The rhymester banshee is a stark reminder that, should the gods see fit to bless you with talents and abilities greater than those around you, it would be wise to develop and use those gifts to accomplish great things—and even elven beauty can be a curse to those that squander it. The blessings of the muses must also be appreciated and shared.

Before their transformation into undead creatures, rhymester banshees were bards of great talent and even greater sloth. Torpidity, greed, and indulgence were the hallmarks of their small lives. These bards were content with petty crimes, small lives, and with amusing themselves with as little effort as possible. Due to their bardic talents and training, these banshees are more powerful than their fair cousins by far. Luckily, the small-mindedness that defined them in life continues to rule their undead existence. The rhymester is typically satisfied to continue the schemes and delinquencies it carried out before its demise.

Detect Life. The banshee can magically sense the presence of creatures up to 5 miles away that aren’t undead or constructs. It knows the general direction they’re in but not their exact locations.

Incorporeal Movement. The banshee can move through other creatures and objects as if they were difficult terrain. It takes 5 (1d10) force damage if it ends its turn inside an object.

Spell Casting. The rhymester banshee is a 5th-level spellcaster. Its spellcasting ability is Charisma (spell save DC 16, +8 to hit). It has the following spells prepared:

Multiattack. The rhymester banshee can make 2 attacks or 1 spell attack.

Song of Eternal Rest (1/Day). The rhymester banshee’s song sends creatures into a magical slumber. Roll 9d8; the total is how many hit points of creatures this spell can affect. Creatures within 20 feet of a point chosen within a 60-foot range are affected in ascending order of their current hit points (ignoring unconscious creatures). Starting with the creature that has the lowest current hit points, each creature affected by this spell falls unconscious until the spell ends, the sleeper takes damage, or someone uses an action to shake or slap the sleeper awake. Subtract each creature’s hit points from the total before moving on to the creature with the next lowest hit points. A creature’s hit points must be equal to or less than the remaining total for that creature to be affected. Undead and creatures immune to being charmed aren’t affected by this spell.

Wail (1/Day). The rhymester banshee releases a mournful wail, provided that it isn’t in sunlight. This wail has no effect on constructs or undead. All other creatures within 60 feet and able to hear it must make a DC 13 Constitution saving throw. On a failure, a creature drops to 0 hit points. On a success, a creature takes 17 (5d6) psychic damage.

2 thoughts on “Random Encounters: Out of the Rain (Part 2)”