Skip to content
Home / Delve into the Depths in the Kobold Blog / Sacred Space: Selket (Part 1) 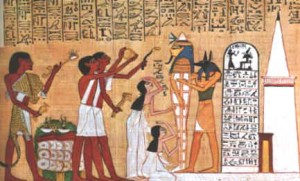 The shifting desert sands mask weathered pyramids and ruined temples dedicated to fallen deities and demons best forgotten. Some are blessedly buried so deep beneath the dunes and so far within the recesses of our collective memory to be all but lost, perhaps never to be revived. Others, unfortunately, continue to poison mortals with their dark teachings and twisted doctrine. Selket, the scorpion goddess, is spoken of in hushed tones, her very name causing dread to clutch the stomach of even the stoutest of heart. They know that when the deity and her shadowy followers target them, there is no way to flee beyond the venomous claws…

Selket is a deity of immense contradiction. On the one hand, she can be called upon to bless an individual with protection from poison, while on the other she concocts death-dealing elixirs and is the proud progenitor of verminous scorpions. Is she a goddess of good intention, or one whose intentions are malediction? Originally she was both, and yet neither. Now, however, poisoned by her own venom and a burning jealousy for the stature of other gods, she is a cruel and sadistic mistress who rarely projects benignity and, then, only as part of an elaborate deception to attract followers.

In her primary domain, she is the birth mother of the scorpion and their patron goddess and, in this guise, is both feared and venerated. Indeed, many desert tribes will refuse to kill any scorpion for fear it may be Selket herself. The venom dripping from Selket’s tail is said to be so potent that it can kill even other gods, so it’s little wonder that assassins pray to her as the mistress of poisons and other herbal concoctions. (Ironically, she is also an influential deity among those who wish to remain safe from poison.)

Additionally, she is a deity of death and mummification, charged by the pantheon of the desert tribes with the sacred task of guarding the entrails of the deceased. As a result, her temples, generally lost amidst the shifting sands of the desert wastes, are inhabited by the soulless husks of past worshippers who serve their deity as eternal guardians.

Selket often takes on the form of an astonishingly beautiful and shapely woman wearing nothing save for a headdress with a scorpion on its top. She finds this pleasing shape highly effective in seducing men to her fold, but once they are in her claw-like grip, she reveals her true appearance: that of a woman with a scorpion’s head, an ichor-dripping scorpion tail, and a hollowed abdominal cavity stuffed with bags and incense.

The scorpion goddess’s church operates on the fringes of civilization, and therefore most places of worship are in out-of-the-way locales or well hidden. Because services to Selket—typically including the sacrifice of screaming victims and ritual ingestion of poisons and hallucinogenic plants—often devolve into an orgiastic excess of violence, food, and delusion, urban-shrines must be well isolated to ensure no attention is drawn to them. In the desert wastes, Selket is worshipped outside or in plundered tombs.

In either case, a church will always have a few common features. There will be a flat, bloodstained sacrificial stone upon which victims are poisoned before their throats are slit. Bodies are disposed of in pits filled with hungry scorpions although the heads are laid at the feet of Selket’s idol, horror-filled eyes staring up at the deity that was the cause of their demise. When at last the flesh rots away from the skull, it is smashed and the bone fragments littered across the floor like pebbles. Each churches of Selket also contains a fountain filled with bubbling black ichor, said to be the goddesses own blood, which is a potent poison and hallucinogen that worshippers use in their rituals.

Relations with other Religions

Selket is largely dismissive of other deities, even those within her own pantheon. She believes she is superior to them and will eventually rise from the desert sands to claim her place as leader of them all. That said, she knows better than to be openly antagonistic since this might encourage her enemies to band together to destroy her. The one deity with whom she is close, in both portfolio and relations, is Nephthys, goddess of birth and death, life and undeath. This is perhaps understandable and natural, as Nephthys is in fact Selket’s mother.

On the other hand, Selket abhors Maoch the Tortured Husk, the Abyssal lord who lays claim over all mummified restless dead from his dust-filled tomb and throne room. She sees him as a petty thug trying to gain status among mortals through terror but who is ultimately not worth her attention.