Skip to content
Home / Delve into the Depths in the Kobold Blog / From the Streets: Down & Dirty with Richard Pett

The Streets of Zobeck are calling you… 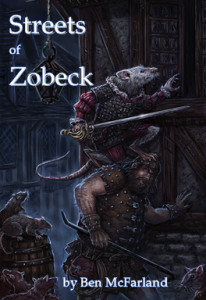 Like the scoundrels in those dark alleyways, Zobeck’s stories are gore spattered, flush with the blood, loot, and secrets of the Clockwork City’s citizens. What kind of secrets? What might you find? Can we interest you in this fine cloak? We’d try it ourselves, but we’re late to meet a Kariv river boat captain…

Cloak of the Inconspicuous

DESCRIPTION
Spun from simple grey wool and closed with a plain, triangular copper clasp, this cloak may be activated 1/day with a command word as an immediate action that does not provoke attacks of opportunity. For the next 5 minutes, the wearer becomes completely unmemorable…

People cannot remember what the wearer looks or sounds like (Intelligence DC 16). Witnesses know someone was there and any actions made, but they can only describe the wearer in the most general terms—“an androgynous person, of average height, dressed like everyone else.” For every 2 points that the Intelligence check exceeds the DC, witnesses may recall a detail, such as race, gender, facial features, clothing, tone of voice, or other distinguishing features. For example, a check of 23 would permit a witness to remember 4 details.

True seeing pierces this effect. Creatures with blindsight are unaffected by this item. 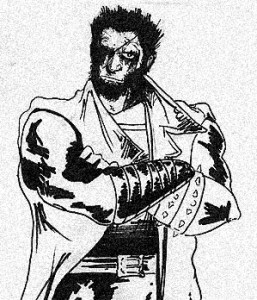 Oh him? He’s here for the whiskey… just ask him. Goes by the name, Pett… Richard Pett.

What brings you back to Open Design, Mr. Pett?

RP: The combination of mean streets, shady locations, and double dealings is irresistible to me. I’ve been lucky enough to lead people to a few dark and sinister places over the years: the Styes, Carrion Hill, and the theatres of Westcrown to name a few. Now I can’t wait to wander the desolate alleys of Zobeck.

What will you be designing for Streets of Zobeck?

I hope I can deliver a little of the dark humor of Lankhmar, an unspeakable fungal thing from Ambergris, and a broken promise from the streets of New Crobuzon from my love of those places into Zobeck, leaving a permanent stain on the Free City.

What makes Open Design appealing to a designer?

So why do I find working in Open Design so nerve-wracking, merciless, and great? The best adventure wins. It makes you a better writer because you work with different people who have different takes on adventures. We make adventures together, and that is brilliant and unique.

Richard Pett is among the most notoriously twisted minds in the field of RPG design. His “Styes” adventures in Dungeon #112 & #138 remain two of the most highly rated of the 3.5E era. He continued his macabre and sinister adventure writing in the Pathfinder Chronicles Campaign Setting with the gruesome Skinsaw Murders and the Lovecraftian Carrion Hill. He is the author of an unpublished novel entitled Empire for which he currently seeks an agent. Pett lives in England where he constantly works to get Nicolas Logue deported.