Skip to content
Home / Delve into the Depths in the Kobold Blog / Relics of Power Finalist: Liberty 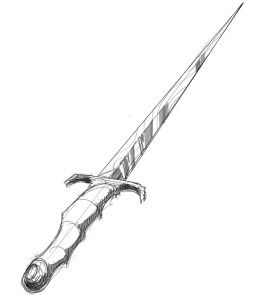 Welcome to the Relics of Power finals! Our ninth of ten finalists is the artifact called Liberty. Remember, these entries are unedited so that you can have a similar experience to the one that the judges had while reading them. As a special treat, we are posting each one with an illustration that Chris McFann made for the item. Take a look!

Appearance: Liberty appears as a straight silver dagger of plain appearance until it is taken into hand by a Good individual. Then, rainbow lights run through the blade, and the blade begins to toll gently, grandly, yet neither noise nor light betray the blade when stealth is required. It is a dagger instead of a sword so that even the commonest man may wield it.

History: The dagger called Liberty has been known as the patron of liberators and the bane of slavers and tyrants for millennia. An intelligent dagger, Liberty has been wielded by commoners and commanders, and delights in placing itself in the hands of the common folk and inspiring them to strike down the tyrannical and unjust, or in cutting down slavers in the hands of an outraged soul leading rebellion.

Liberty has been traditionally wielded by bards and good-hearted rogues. Bards can use the ringing and rainbow display of the blade as their performance check for bardic abilities while wielding it in battle, and the ringing bells of its sonic ability take on multiple tones while the light strobes and thrums with the cause of freedom. A bard can maintain his standard morale-raising song with no cost while wielding Liberty. Those using stealth find that the brilliance and song of the blade never betrays their location.

Abilities: Liberty has the power to split itself into two daggers to cater to those who fight with two weapons, and historically has been wielded best by rogues and bards of CG alignment.

Liberty is always +1 Thundering Burst, Holy Anarchic dagger, the essence of a CG weapon. Its sonic damage manifests as a thunderous ringing through the bones and skull of those struck, becoming a great toll of doom if a critical is scored, a blast of divine acclaim that can shatter bones. If thrown, it returns itself to its throwers hand at the end of his turn.

Against humanoid foes (any type, including humans, elves, dwarves, etc) who are foes of freedom, the weapon will additionally manifest as Brilliant and the appropriate Bane, carving through armor, flesh and bone with equal ease…it especially enjoys carving up LE blackguards and priests.

Against Fiendish foes, often found in the service of tyrants and slavers, Liberty’s extra enchantment changes to Greater Wounding and Evil Outsider Bane, ripping at the essence of their beings.

If Liberty splits into two, these opposing enchantments appear one set to each weapon. None of Liberty’s magic will work against a Good soul, and it always inflicts minimum damage if it accidentally strikes a Good person. Nor will it deal more then minimum damage against commoners of any alignment…its job is to free such, not oppress them nor strike them down.

Liberty has an Intelligence of 19, can communicate telepathically, and has the special purpose of Restoring Freedom. It loathes slavers and tyrannical domains that oppress common folk, and works tirelessly against them. Because of its alignment and beliefs, it will never compel another being to action, but will remove itself from the possession of those who will not wield it in its cause. It has an effective ego of 40 to inflict damage on those opposed to it who would dare touch it. It can do Ego damage to entities in possession of others, forcing them to abandon a host or perish.

Liberty can move itself around at a speed of 60′, as if it had telekinesis (but cannot fight). Any being bearing it is protected by Protection from Evil, Freedom of Movement, and Mind Blank, protecting body and soul against outside subjugation. It constantly senses Evil in a 60’r, and notes bias instantly (LE, NE, CE) when it senses them. It can Teleport w/o Error and cast Greater Magic Weapon (self only, CL 25) once a day each, enabling it to bypass borders and laws to go where it is needed.

The touch of Liberty opens all doors, locks, and bindings, and is powerful enough to lift away bars and break manacles welded tight (CL 25). This is always accompanied by the ringing of a bell, loud in celebration or muted as suits the occasion.

Liberty cannot inflict damage on another being or object without being wielded, nor employ any of its powers save teleporting itself without being grasped first. It is a tool to deliver freedom, not a deliverer itself, empowering those who would throw off oppression.

Unmaking: Liberty can be destroyed if cursed by ten thousand shackled slaves consecutively as it sets them free of their bonds.