Skip to content
Home / Delve into the Depths in the Kobold Blog / Relics of Power Finalist: War Band of the Last Mead Hall 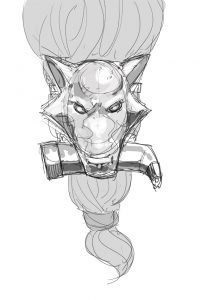 Welcome to the Relics of Power finals! Our very last finalist is the artifact called the War Band of the Last Mead Hall. Remember, these entries are unedited so that you can have a similar experience to the one that the judges had while reading them. As a special treat, we are posting each one with an illustration that Chris McFann made for the item. Time to read!

The laughter of Ogradin can still be heard in the mead halls of Wolfheim, echoing in the sonorous chanting of the warrior skalds and the drunken singing of the reaver dwarves. Lord of the ale horn, he of unending laughter, Ogradin is a legendary hero of the Wolfheim dwarves who was known to drain large ale barrels in a single, long quaff. A ferocious fighter, warriors say his battle cry could split the frost-covered stones, splinter the shields of his enemies and cause even the iceblooded trolls to quake in terror at his charge.

Honored in death, Ogradin was elevated beyond the ranks of mere hero and rose to become the lesser god of constitution, and patron of the mead hall. Just as many dwarves have died trying to live up to his prowess at drinking as have fallen under the axes of the giants, or so the tales say. Ogradin’s priests hold court in taverns throughout the Northlands, extolling his virtues and exhorting his followers to greater heights of reckless combat and drunken revelry.

Legends abound of fearless warriors being granted the boons of Ogradin, which can manifest as a bottomless stomach in the alehouse or an equally unending thirst for combat. Rarer yet are the stories of warriors coming into possession of actual physical gifts that the god bestows on the most faithful or worthy. One of these is a legendary item known as the War Band of the Last Mead Hall. This heavy gold and mithral ring is worn around the heavy war braids reaver dwarves wear in their beards during battle.

This artifact snaps together in a clasp that features an upturned ale horn grasped in the mouth of a wolf. Its lustrous metals gleam even in dim light and it marks the wearer as a favored champion of Ogradin and a warrior worthy of admiration.

Beyond the honor it confers, the band holds a deeper magic. Legends say Ogradin let out a great war cry just as the band was created, forever trapping the power of his deep voice within the reverberating metal. Wearers of the band are able to tap into the god’s powerful battle cry to encourage their allies or smite their enemies.

Three times per day, as a free action, the wearer can strike the metal band with a free hand or weapon haft, causing it to resonate with the god’s power. The next sentence that escapes the wearer’s lips will be delivered with the full force of the god’s breath, blasting forth as if the wearer’s voice had been magnified tenfold. The cry can be heard over the din of the most bloodthirsty battle, and will carry for miles in the lonely places of the world.

This masterwork war band grants a +2 social benefit to the wearer among reaver dwarves of the Northlands. In addition to its ability to magnify the wearer’s voice, the wearer gains a +2 to Communication (Leadership), or Strength (Intimidation) tests in the round it is activated.

In the heat of combat, the band also can be used to blast foes with the power of Ogradin’s mirth or anger. For four Stunt Points, the wearer can perform a special Hammer Shout stunt that causes up to two enemies within six yards to be knocked prone. For each additional Stunt Point spent, the wearer can increase the range of the stunt by two yards or affect an extra enemy. These additional effects can be combined, and unleashing the power of the band in this manner uses up one of its daily charges.

4 thoughts on “Relics of Power Finalist: War Band of the Last Mead Hall”