Skip to content
Home / Delve into the Depths in the Kobold Blog / All the Rage: A Kinder, Gentler Barbarian Totem? 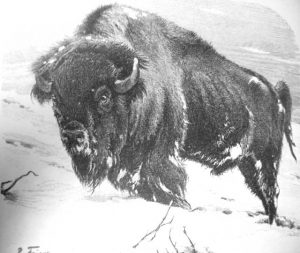 Inspired by our article on barbarian totems, “All the Rage” [part 1][part 2] by Matthew Cicci, KoboldQuarterly.com fan and forum regular Simon the Overthinker celebrates the idea in a slightly different way.

Mathew Cicci did an excellent job of capturing the essence of the barbarian totems and their meaning to the tribes and clans that follow them. I humbly attempt to add to that work by reflecting on the flip side of the predatory totems. I would not call them prey though. When enraged, many of these beasts are formidable foes to even the most experienced hunters—animal and man alike.

“Atatark trembled, spear in hand, as he crept to the crest of the low hill. As he moved the earth shivered, and the dust and thunderous noise grew. As the plains below came into view, Atatark was overwhelmed by the sight of thousands of buffalo moving past. Saying a prayer of thanks, he hefted his spear and looked for a target.” …

Those who follow the buffalo totem are steady stalwarts of clan and family, and quiet and selfless in comparison to other barbarians. Accepting their place shouldn’t be taken as a sign of weakness, however, for you anger them at great risk to your life.

Like their totem namesake, they become an unstoppable tide when moving in defense of the clan. Their strength and ferocity leave nothing intact in the wake of their passing.

Strong and Stout (Ex)—As with the bear totem, you gain a +1 resistance bonus to Fortitude saves for a number of rounds equal to your Constitution modifier (minimum 1). This bonus increases by +1 every 6 levels. The power is activated as a free action and is usable only while raging.

Flatten (Ex)—A successful melee attack does the weapon’s damage and also knocks your opponent prone (no save). The prone combatant loses 1 turn of combat and is flat-footed. This power is a free action (1/day) and is usable only when raging.

Tribal Tide (Ex)—Like the herds they revere, when multiple warriors are working together, the group is greater than the sum of its parts. When 4 or more allies fight side-by-side with a buffalo totem barbarian, the whole get a +1 bonus to AC and attack rolls. This automatic bonus applies whenever at least one barbarian of 5th level or higher goes into a rage. The benefit does not stack if others in the group also go into a rage.

Nothing makes the blood race like running with the wind over the steppes. Followers of the horse prize speed and endurance in themselves and their mounts. A favorite tactic, whether mounted or on foot, is to strike hard and fast, retreating and readying for another foray before the enemy can react.

These clans prefer the wide-open spaces and are the least trusting of what city dwellers have to offer. They take great pride in their skills with axe and bow and can wield both while moving without any penalty.

Greater Gallop (Ex)—You can increase your land speed by +15 ft. for 1 round/5 levels. This power is a free action (1/day) when raging.

Rearing Blow (Ex)—The blow from a horse hoof is can stagger or kill an opponent. When in a rage, you gain the same fearsome attack. An overhand strike gains a +2 bonus to attack and +4 bonus to damage. This power is a free action (1/day) and is usable only when raging.

Horseman’s Pride (Ex)—This allows you to knock another rider off their mount and mount it yourself while the horse is in stride. You must make a successful grapple and gain a +4 bonus to such grapple attempts. If you succeed, the target falls from the mount (see Pathfinder Roleplaying Game Core Rulebook for details on the Ride skill). This power is used instead of a standard attack (1/day) while raging at 3rd level or higher.

The full-grown stag is a majestic sight. Its followers are a proud group, believing themselves superior to all others. Their passion for family and clan leaves no room for second guessing any action taken on behalf of the group.

Challengers beware: this proud stance belies an unmatched skill in individual close combat. An experienced stag warrior’s presence inspires those around him.

Goring Attack (Ex)—A successful pierce or slash attack does double damage. This power is declared before the attack, and regardless of its success, the attacker grants his foes one attack of opportunity as a result. This power is used instead of a standard attack (1/day) while raging.

Antler Entanglement (Ex)—Along with normal damage, a successful attack automatically disarms your opponent. You provoke no attacks of opportunity in the process. If the attacked opponent is utilizing two weapons, only one is lost. This power is a free action (1/day) when raging.

Stag’s Presence (Ex)—Available at 4th level and higher, this power helps you inspire allies for 1 round/3 levels while raging. This provides a +2 morale bonus to all allies with line of sight to you. The effect ends if you are knocked unconscious or killed.

DESCRIPTION
This skin and fur of a great buffalo have been fashioned into a cloak.

You are granted the indifference of a buffalo to the elements. Wearing this negates any minuses suffered for natural cold, wet, or windy weather. The wearer receives a +1 bonus for any saving throw against similar magic effects.

Heart of the Stag

DESCRIPTION
A small antler tip is hollowed out and filled with the blood of a stag honored by the hunt. This is stoppered and attached to a simple leather cord to be worn as a necklace.

You gain immunity to fear attacks of 5th level and under. You gain a +4 bonus to saves against fear effects over 5th level.

This is a fine necklace, intricately woven from the hairs of a horse’s tail.

You or your mount may run full speed for 1 full round with no effects of fatigue (1/day).

2 thoughts on “All the Rage: A Kinder, Gentler Barbarian Totem?”