Skip to content
Home / Delve into the Depths in the Kobold Blog / You’re Cursed! 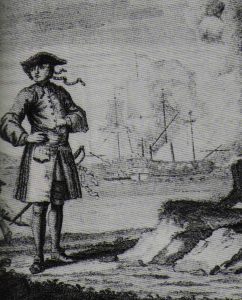 Imprecations—curses—are as old as recorded memory. They appeal to supernatural powers to inflict harm on a person or group. Practiced by many cultures, the curse usually involves crafting an effigy of the victim with clay, stuffed cloth, wax, or wood, and marking or painting to represent the target. Though malicious and spiteful evil magic, the curse is sometimes used by good- and neutral-aligned characters to harm enemies. Those acquiring a curse may have disturbed a restful tomb, stolen a particular object, or pushed the alignment envelope. A curse can also be a blessing in disguise: it can help flesh out a character’s persona by adding an attack or ability, or it could provide the gamemaster ample fodder for adventure design. For example, African and European cultures mixed together among the islands of the Caribbean Sea, spawning legends of cursed men, places, ships, and treasures. Those enjoying the short and merry life of corrupt codes, debauchery, and scoundrel deeds paid them great heed.

The following curses are inspired by corsairs of the Caribbean. Adding spice to any campaign—especially those of a maritime or swashbuckling nature—they can be easily tailored to your needs or modified from 3.5 to other mechanics.

Bilge-Spouter: The target becomes a compulsive liar, unable to answer even the simplest of questions truthfully. Penalties are incurred to Charisma-based checks, especially Bluff and Diplomacy checks.

Boils and Barnacles: Salt-water-filled suppurating pustules grow about the cursed body, and sharp barnacles begin to form in the most inconvenient of places. Penalties are incurred to all Charisma-based checks, and the cursed one takes 1d6 damage per day.

Brant Claw: One of your feet becomes the foot and talons of a seagull. The avian foot is heavy and drags, forcing the target to use a walking stick and reducing movement to half speed.

Carcharias: Teeth drop out one by one and are replaced with serrated triangular shark teeth. This can add a bite attack to a character’s arsenal.

Death Dirt: Food turns to dirt in your mouth. Tasting of decay, it causes choking and vomiting. This is a serious curse, since it can cause malnutrition if not dealt with quickly.

Dino-Dinner: Dinosaurs single out the cursed one for attack. Once engaged, the dinosaur(s) fight to the death.

Fishy: The target develops gills on his or her neck or cheeks. Though useful underwater, this curse is accompanied by a foul fishy odor that repels even your best of friends.

Gold Fever: The target drools in the presence of gold and, in order to possess it, will go as far as stealing it from allies.

The Hand: Decayed and seaweed-dragging, a severed lower arm—human or monstrous—tirelessly hunts the cursed one, perpetually threatening a choke of the throat or a blade to the gut at the most inopportune moments. The Hand deals slashing damage with its nails, can wield a dagger or spike, and chokes or trips with a successful check.

Haunting Dream: A lost love or dirty deed haunts the cursed one’s dreams, disturbing precious sleep. This prevents restful sleep and natural healing, leaving the subject fatigued and unable to regain arcane spells for the next 24 hours. Hit points are not recovered.

Moon Burn: The target sweats profusely when exposed to moonlight. A full moon can cause the cursed one to strip naked in heat frustration, implying insanity or lycanthropy to companions with resulting complications (such as mutiny). This curse reduces leadership scores and saving throws. The moon burn curse demands increased fluid intake and can cause dehydration.

Patch: One of the cursed one’s eyes withers, dries, and falls out, incurring a penalty to Dexterity. Other impacts, such as degraded or lost darkvision, can also occur.

Pothia: One of your lower arms becomes a rubbery octopus tentacle—suckers and all. The curse negates the benefits of Two-Weapon Defense and Two-Weapon Fighting, and it also prevents the use of two-handed weaponry, though the transformed limb adds a tentacle attack and improved grab.

Quiet One: The target is struck mute. Spells with verbal components cannot be cast, and the target incurs a penalty to all Charisma-based checks.

Regnum Kalamar: Developing a gland on the neck, the cursed squirts black ink when surprised, when low on hit points, or while fleeing combat. The resulting ink cloud can provide concealment underwater or slippery surfaces on land.

Rum-to-Water (Teech’s Revenge): From grog to the finest rum, once in the mouth of the cursed one, it turns to pure water. The horror . . . or advantage.

Time-Poxed: You age overnight. If you are middle-aged, you become old; if old, you are now venerable. This drops your Strength score, Dexterity score, and Constitution score. However, Intelligence score, Wisdom score, and Charisma score go up.

Waister: Your seamanship skills deteriorate, making you dead weight and shark bait in the eyes of your mates. Skilled boaters or sailors lose Profession ranks.

Curses can be broken. Besides the abjuration spell break enchantment, GMs can devise adventurous means for freeing the cursed: objects can be returned, effigies destroyed, blood repaid, and wrongs undone. Used creatively and sparingly, curses can offer moments of high drama in roleplaying. When PCs in your world scurry from the rigging of a black ship to fall on a sleeping village like a nightmare, when they pry that jewel from the sacred statue’s eye, or when they break the seal on a tomb clearly not meant to be disturbed, how loud will you curse?

About the Author: Pete is a freelance writer and PhD student. Originally from New York, he now lives in Northern California with his daughter and wife.