Skip to content
Home / Delve into the Depths in the Kobold Blog / Relics of Power Finalist: Crystalline Chrysalis 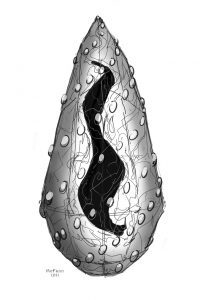 Welcome to the Relics of Power finals! Our second of ten finalists is the Crystalline Chrysalis. Remember, these entries are unedited so that you can have a similar experience to the one that the judges had while reading them. As a special treat, we are posting each one with an illustration that Chris McFann made for the item. So, what do we have here?

At first glance, this powerful minor artifact could be mistaken for a naturally formed, smoky, rose quartz prism, but it lacks the angular edges normally found on such stones. The base is rounded and widens for 2/3 of its approximately 2” length before tapering to a shallow, conic point at the top. Several tiny bumps encircle the crystal at its widest girth and tiny micro fractures as fine as thistledown grant a sparkling, downy appearance to its depths. The stone most closely resembles the chrysalis (or cocoon) of a monarch butterfly. A vague, indistinct, shadowy form seems to twitch and wriggle in its interior.

The chrysalis has several potent powers, all functioning at the 18th level of spellcasting:

The crystalline chrysalis is destroyed one week after being ingested by a gargantuan or larger vermin (i.e. purple worm, titan centipede, etc.)