Skip to content
Home / Delve into the Depths in the Kobold Blog / Real Steel: Tetsu-Ken 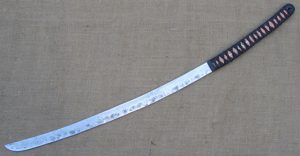 The tetsu-ken, or tekkan, is a little-known swordlike weapon from feudal Japan. The originals were mostly wakizashi-sized and appeared to be a wakizashi, but were made of iron rather than steel and had no edge.

Why a “Sword” without an Edge? 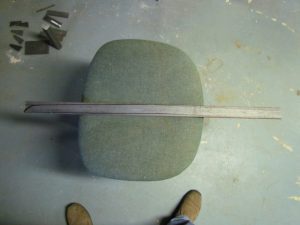 The rulers of feudal Japan vigorously enforced laws preventing the carrying of swords by all but the samurai class. Wealthy merchants and farmers often carried tetsu-ken as a substitute for swords, and this was either allowed or overlooked by the government. In 1876 when the Meiji government initiated the Haitorei Edict, also called the “Sword Abolishment Act,” the Samurai class began to carry them also.

Why a Sword at All?

I see two obvious reasons why the weapon was shaped like a sword. The first is a practical matter: it handles like sword. Being made of un-hardenable iron, they would need to be a little thicker and therefore a little heavier than a steel wakizashi, but the balance and handling would essentially be the same. The second reason would be that a “swordlike object” is more of a status symbol than an iron bar.

Why’d I Make One? 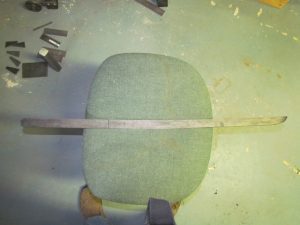 This was a custom order. I have a regular customer who is as interested in practicing with obscure weapons as I am in making them. The order was for a katana-sized and fully functional tetsu-ken within some specified parameters of length, weight, and sori (curvature). A wrapped guard-less tsuka (handle) with a forge finish and specific false edge geometry were also specified after we discussed intended usage and expected capabilities.

We decided that 5160 was the best steel for the job due to its extreme toughness. I ground a sonobe (pre-form) from 0.25” stock, and then forged the bevels. Forging the bevels creates more curvature, so I had to correct and straighten as the forging proceeded. I left more curvature than was ultimately needed because during the heat treatment I’d be quenching in oil, and oil quenches reduce curvature. 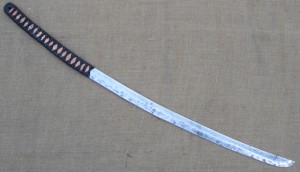 I quenched the piece several times throughout the forging. This is the first part of heat treating and is called thermal cycling. It serves to keep the grain size small and relieves stresses caused by forging, which is critical to a properly heat-treated blade. The next step in heat treating is normalizing, which is accomplished by heating the blade to critical temperature and allowing it to cool at ambient temperature until it regains its magnetism—three times. Each time the steel is heated to a slightly lower temperature before being allowed to cool. After the third heat, the blade was placed in a “hot box”—mine is a steel garbage can filled with wood ashes. I preheat two large pieces of scrap steel that go into the wood ash with the blade, forcing the blade to cool very slowly. The two normalizing heating and cooling cycles serve to further refine the grain, and the last heat and slow cooling, called annealing, softens the steel to its minimum hardness. It takes about eight hours for a large blade to cool in the hot box.

After annealing, I ground the “edge” and cleaned up the profile a little. Next came the final steps in heat treatment—hardening and tempering. Something I didn’t mention earlier is that my small propane forge I use for heating metal for forging was not large enough to heat the entire tetsu-ken for heat treatment. Here’s a link to a WIP (work in progress) of how I built the drum forge I used for the heat treatment. There also is a short video embedded in this article showing the forge running. For hardening, the entire blade is heated to critical temperature and then quickly quenched in oil designed for this purpose. I then check the blade for hardness with a file, making sure the entire blade hardened. The blade was then put in my propane grill at 500° F for a couple cycles to temper.

Next was a quick clean up with a Scotch-Brite belt, and then leather underlay and bat menuki were installed on the handle followed by the wrap and epoxy. I soak the wrap in two part epoxy to hold it in place because without the traditional fittings it will start moving around over time.

How Does It Work?

Nicely! It handles just like a katana of its size and weight, and it hits hard. The final weight was around 2.4 lbs., which is a little heavier than a typical katana, but was necessary. A sword that cuts through a target isn’t subjected to as much force as a blunt weapon that strikes a target without passing through it. That extra meat gives the tetsu-ken the strength to absorb those forces without being damaged.

How Would I Use It in Game? 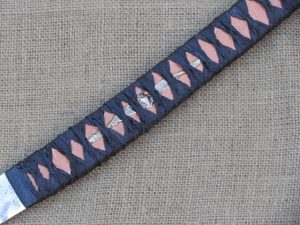 This opens up some possibilities for classes that are prohibited from using edged weapons. I don’t see why a cleric couldn’t use this. It will fit well in an Oriental Adventures style game, but why not use a similarly constructed bastard sword, Viking longsword, or langseax?