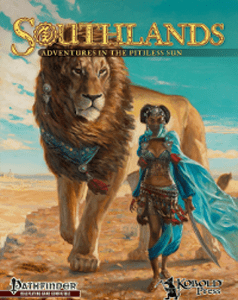 (For use in the Midgard World Setting – Pathfinder Rules)

A heritage feat represents an ability gained through genetics, cultural upbringing, or a childhood event that occurred prior to beginning your adventuring career. Heritage feats can only be taken at 1st level. Unlike standard feats, heritage feats can grant supernatural powers and spell-like abilities, and they sometimes have negative consequences as well as benefits. With the gamemaster’s permission, players may substitute all their trait selections for their characters for a single heritage feat. Prerequisites for heritage feats typically do not include class features, feats, or skills. All bonuses granted by heritage feats should be considered trait bonuses. Stylistically, heritage feats are used like traits, to give a player character flavor, backstory, and to couple them to the campaign setting.

Blood of the God-Kings (Heritage)

You are of the bloodline of one of the ancient God-Kings of Nuria Natal. This grants you awesome supernatural powers.

Benefit: Aasimar—You gain one extra use of your daylight spell-like ability per day for each point of your Intelligence modifier (+4 bonus means five total daily uses). Also, starting at 3rd level, you gain the use of searing light once per day as a spell-like ability for each point of your Charisma modifier. Your caster level is your character level. At 11th level, your racial skill bonuses and resistances double to +4 and 10, respectively.

Tiefling—You gain one extra use of your darkness spell-like ability per day for each point of your Wisdom modifier (+4 bonus means five total daily uses). Also, starting at 3rd level, you gain the use of flame blade once per day as a spell-like ability for each point of your Charisma modifier. Your caster level is your character level. At 11th level, your racial skill bonuses and resistances double to +4 and 10, respectively.

You were once held captive and experimented upon by a God-King or other powerful being. This being did something mysterious to your lifeline, and untethered you from the chains of fate, before letting you go free. You do not know exactly what was done to you, and you have only vague, painful memories of your imprisonment.

You were a slave, but were freed, or freed yourself from bondage. Your suffering made you strong.

Benefit: You gain a +1 trait bonus to all Constitution-based checks and saves. This does not stack with Great Fortitude.

You were born dead, or spent time in the Underworld, and were touched by the darkness of the Realms of Death. Now you dwell between worlds of the living and the dead.

You have an elemental creature in your bloodline (jann, djinni, ifrit), and have inherited some of that creature’s power.

Benefit: When you select this feat, choose one of following energy types: acid, cold, electricity, or fire. You gain resistance 5 against the chosen type of energy. This energy type cannot be changed later without divine or mythic intervention. At 11th level, your resistance to the chosen energy type increases to 10.