Skip to content
Home / Delve into the Depths in the Kobold Blog / Friday Funny: Dire Turkey 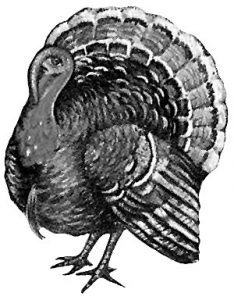 Gunnar the Huntsman studied the tracks in front of him, grimacing when he saw those made by a pair of large birds. Trina, a young woman who had accompanied him on his annual hunting trips to Fairview in the past, fidgeted at his side. Why the new mayor of Fairview had suggested she accompany him this time, in spite of the protestations the mayor had made just weeks before regarding the barbaric practice of “turkey hunting,” was beyond him. Trina had proven herself capable in the past, though, so he had allowed her to come along.

“At this time of year, the turkeys spread out, almost as if they know that one of them will end up as part of the Fairview Feast. This is the first time in my ten years here that they’ve paired up.” Gunnar followed the tracks with his eyes, noting that they diverged a handful of yards away at a yew tree.

Trina spotted the claw marks on the tree. “I know this!” she exclaimed. “The turkeys sharpen their claws in anticipation of a fight. It looks like the larger of the two went left, while the smaller went right.”

Gunnar sighed. This seemed more like it. “We’ll follow the larger one, then. I don’t want to disappoint the townsfolk.”

As he spoke, the sun emerged from behind some clouds. He reached into a pocket and withdrew a pair of smoky quartz goggles, which he then placed over his eyes. At the inquisitive look from Trina, Gunnar grunted, “Light sensitivity.”

After a short walk, Gunnar saw the bird grazing in a clearing. The huntsman drew his knife and quietly approached his quarry. To his surprise, he barely noticed Trina following along just behind him. She’d improved recently! He got within range of the seemingly placid creature, when it suddenly looked up and stared over his shoulder — but the one that Trina was not standing behind. Slowly peering over his shoulder, he saw the other bird, preparing to strike with its deadly claws.

Before he could utter any words regarding the turkey’s cleverness, he heard the mayor’s voice muttering somewhere to his left. “The damn things should have dispatched him by now. I charmed the beasts and instructed them to kill him on sight. The girl, too. Then, when the town sees how deadly this stupid hunt is, they’ll stop the whole silly practice.”

The creatures spun away from the huntsman and his companion, leaped at the mayor as he emerged into the clearing, and disemboweled him as he shrieked. Then, the smaller bird looked meaningfully at Gunnar, and both turkeys leaped away.

Gunnar removed his goggles and nodded. “Sadly, yes. He must have been a druid who thought the Fairview Feast was terrible for the birds and wanted to shut down the celebration by murdering us. I’ve seen it before.”

“What will happen now? Are we still going to hunt for a turkey?” Trina shook.

Gunnar looked down at the ground. “No, I regret this year’s occasion will not have a bird. In fact, Fairview will remember this feast as the one where the turkey…”, Gunnar put his goggles back on, “…was the mayor.” Nearby, a bobcat screamed.

SPECIAL ABILITIES
Resistant to Charm (Su) Dire turkeys enjoy a +8 morale bonus to Will saving throws made against mind-affecting charm effects. Additionally, the turkey gains a +1 morale bonus to attack rolls and damage rolls against a creature unsuccessfully attempting to charm it.

Dire turkeys are giant predecessors of the garden-variety turkey. A dire turkey’s meat is just as flavorful as that of its smaller relative and provides enough food for an entire village for a week. Very few complain about leftovers when a hunter successfully bags this creature.

In the wild, a dire turkey contents itself with wandering aimlessly around and eating whatever plants it finds. When startled, the creature becomes aggressive and will attack until it or its foe dies. If a pair or more turkeys fight together, they prove remarkably adept at rudimentary tactics and work to flank opponents.

Care and Handling of Dire Turkeys
Many druids and rangers make the mistake of assuming they can just charm a dire turkey and bring it to the butcher’s table—much to their detriment. A DC 19 Knowledge (nature) check reveals the creature’s resistance to charm effects. However, this resistance does not preclude domestication of a dire turkey. A prospective dire turkey farmer can rear one of these creatures with a successful Handle Animal check (DC 19), or calm and domesticate an adult dire turkey by succeeding at a DC 24 Handle Animal check. The turkey will not fight on the character’s behalf, but it will allow itself to be the main course of the next celebration. Domesticated dire turkeys sell for 5 gp, while whole, dressed, dire turkeys can fetch up to 10 gp.

About the Author
Mike Welham devotes far too much time to designing goofy creatures for the KQ website. He blames tryptophan for this latest creation.