Skip to content
Home / Delve into the Depths in the Kobold Blog / Real Steel: Coins of the Southlands 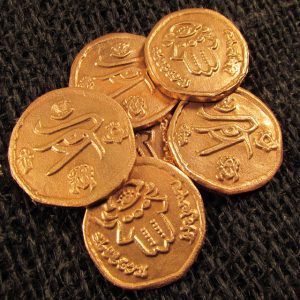 Coins. Gold, silver, bronze, and copper. Throughout history, they’ve been struck, cast, engraved, and cut. Their style and artwork are a reflection of the culture that created them. It’s no surprise that coins are being used in gaming. They can help build the flavor of a world and give insight into the religions and art of the culture.

When Wolfgang asked me if I could make custom, handmade coins for the Southlands Kickstarter project, I had to admit that I hadn’t done it before, but that I’d like to try to figure it out.

The first method we discussed was striking. Striking is a great method for long runs, but it’s impractical for a short run. There’s too much time and effort involved in engraving the dies to make what will probably be a few hundred pieces at most. Casting is also better suited to long runs, and I’m not set up to do it.

So, who’s heard of sintering?

Sintering is a metallurgy process where a finely powdered metal is brought up to a temperature at which the grains will stick to each other, effectively forming a piece indistinguishable from the metal in its solid form. It requires lower temperatures than casting and allows the metal to be worked cold—at room temperature, in fact.

From Start to Finish

The process I used has a lot of steps. None of them are very complicated, but there are a few specialized pieces of equipment and some unusual materials. The metal itself can be pretty finicky about being shaped and fired, and there was a fairly long and sometimes challenging trial and error process.

Wolfgang somehow finagled my brother, David, into doing the art for the Southlands coin. I made a negative transparency from the original art, and I used the negative as a mask to create a mold on photopolymer plate.

So, here’s the longer explanation: The original art is a positive digital image, which I turned into a negative printed transparency, which I used to make a positive mold from photopolymer plate. The photopolymer is then used to make a negative mold in PVC polymer, which is used to form the positive image in the metal powder. It got a lot more complicated than I had hoped because the photopolymer plate was overexposed when I used a positive transparency mask, and decreasing the exposure didn’t help. The negative allows in much less light and worked out fine. Did you get that? It gave this dyslexic metal bender a brain cramp. (Feel free to ask questions in the comments if you’re still lost.)

We may go to other metals at some point in the project, but as of now all the coins are being made of bronze. I started with a 44 micron bronze powder, and mixed it with methylcellulose and water, forming a paste. With some tinkering, I got the metal to a consistency like putty or clay. There is, in fact, commercial metal clay that would have been much easier to use than my own formula, but it costs so much more that it would have made the project impractical.

The methylcellulose used as a binder will prevent the bronze from sintering, so it has to be burned out prior to firing. This is done by pre-firing at 1000° F in an oxygen-rich environment, which facilitates the burning of the binder. The burn-out happens quickly and no hold time is required. The pieces come out of the pre-fire blackened.

Firing is done in an oxygen-poor environment because oxidation prevents sintering. This is done by burying the pieces in carbon. The carbon burns and deprives the atmosphere in the sintering pan of oxygen. I found that coconut shell carbon works well. Firing at 1470° F with a two-hour hold time yielded a strong and complete sinter. The firing process leaves the coins with peacock oxidation colors. A quick tap with a metal spoon reveals that they are now solid metal.

Clean Up and Finish

The process is tweaked enough that surface finishing can be done with a handheld wire brush. They could be buffed to a high shine, but that’s not the antique finish we’re looking for. The edges are trimmed and finished on a belt grinder, leaving a scratch pattern similar to the reeding found on the edges of many coins.

Questions, as always, are most welcome.

Join us for the ongoing Southlands Kickstarter project—if you haven’t already! (If you have, many thanks!) We have a few more weeks left to go before the Kickstarter ends, so please do check out all the added stretch goals and see what more are in store for you this week!

11 thoughts on “Real Steel: Coins of the Southlands”