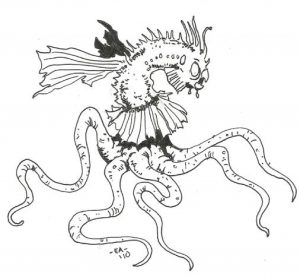 From the darkest depths of forgotten seas, an ancient evil has been pulled into the light.

The venerable sailing bark The Lusty Elf has made an unexpected catch while weighing anchor off a nameless isle. The four hale and hearty sailors who manned the anchor windlass, struggling mightily to reel in the heavy iron, found a gargantuan chambered nautilus attached. Having eaten naught but cod and moldy bread for many weeks, the crew was anxious to dine on this giant delicacy. But, lurking behind the monstrous mollusk waited a nasty surprise…

Once thought to be the forgotten children of the Kraken or older forgotten horrors, the morkoth has recently given up much of its secrets. Known to some as the “Morlock of the Deep” or the “Wraith of the Deep,” its habits and habitats have been shrouded in mystery.

Arcana DC 25—A morkoth is an extremely intelligent and shy monster. It sings a hypnotic dirge to lure its prey deep into its lair. Once there, victims are charmed and eaten, or they serve as host for the creature’s eggs. It is said that the morkoth can reflect magic, but few who enter its lair live to tell the tale.

Nature DC 20—An adult morkoth is solitary and never caught unaware. It uses the architecture of its home to mesmerize and entrap victims. Juveniles have been known to inhabit the shells and even bodies of larger creatures. It uses its strong tentacles to pull its prey close to its razor sharp beak.

[r] Dominate (standard; at-will) ◊ Charm
Ranged 10; targets a dazed humanoid; +14 vs. Will; target is dominated (save ends); a morkoth can dominate only one creature at a time

Spell Reflection
Any spell cast against a morkoth is reflected back toward the caster; if a dispel magic is cast simultaneously, it has a 50% of hitting the morkoth

A morkoth lives and fights alone. It will daze and dominate one opponent at a time, starting with magic users when possible. Their lairs are small and can accommodate only one melee attacker at a time. When an attacker is charmed, the morkoth either eats it or plants its eggs in its abdomen. The actual implantation deals 1d10 damage. The new host cannot spend surges or heal themselves. The implantation can be reversed within 1 day, but the eggs burrow into the spine after this time and will eventually burst out, dealing 6d6 damage. The gestation period is believed to be approximately 20 days.