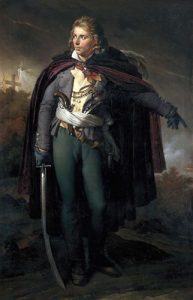 Precision over power is the credo of the swashbuckler. Daring swordfighters who rely on skill and speed, most people picture swashbucklers as swaggering bravos with dueling capes over their shoulders. However, while a duelist in a feathered hat or a pirate captain storming the deck of a ship may be swashbucklers, it’s important to remember those aren’t the only characters who can make this class work for them.

Most players see the swashbuckler and decide to take their Dexterity as far as they possibly can. These players max out their Dexterity score, and then take feats such as Dervish Dancer or Slashing Grace to add their Dexterity modifier to their damage. Typically players will also focus on high-crit weapons like scimitars or the rapier (often considered the signature weapon of the swashbuckler) to get as many critical hits as possible, counting on abilities such as Precise Strike to increase the amount of damage they’re dealing.

However, something a lot of players may overlook is that you can use a bastard sword with Slashing Grace. Not only that, but if you have at least a 13 Strength you can take feats such as Power Attack, Furious Focus, and even Vital Strike. Even if you choose to forego the sheer size and weight of something like a bastard sword, though, it’s important to remember that weapons like the cestus and the spiked gauntlet are also piercing weapons. A swashbuckler who backhands enemies’ blades aside, then drives her fist into an opponent’s unprotected center line may not look like what people expect… and that’s part of the fun.

So, you’ve decided to forego the traditional dashing swordfighter. Now that you’re creating outside of that framework, who is your swashbuckler?

Perhaps he’s a waterfront thug—the sort who uses boasts and loud noises to make up for a lack of artfulness in his combat prowess (something pretty close to the original meaning of the word swashbuckler). Perhaps your swashbuckler is a sea-going reaver, who has perfected the use of a gauntlet or cestus to keep a hand free while still being armed. Perhaps the use of a heavier weapon, like a longsword or a bastard sword, is a tradition where she comes from, but she found that staying mobile was a much smarter way of fighting than wearing heavier armor and slugging it out. Maybe combining strength and speed into a single, savage fighting form is how a half-orc from Belkzen, or a warrior from the Land of the Linnorm Kings, would fight. It’s also entirely possible that your unusual swashbuckler developed a unique style—something created while watching tiger’s hunt, for example, or by using full-body motions to build up momentum to deliver more powerful blows.

The goal of this concept is that when you sit down at the table, no one should be able to guess your class based on stereotype. Maybe you’re a recalcitrant outsider, with the tattoos and scars that would lead some to believe you’re a barbarian. Perhaps you’re a big-boned brute, and you let people believe your size makes you slow. They might mistake you for a monk, a brawler, or just a madman who likes to get close during a fight. By keeping the focus off your mechanics and class, it’s more likely the other players will focus on who your character actually is, rather than what he or she is mechanically filed under.