Skip to content
Home / Delve into the Depths in the Kobold Blog / The Red Eye of Azathoth: a Public Report 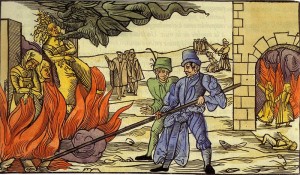 Azathoth, the blind idiot god, slumbering as he has for eons untold in the darkness between the stars, has been disturbed. Should he awaken and open just one of his uncaring red eyes, all of creation will be unmade. But such terrible beings are not awoken easily . . .

And the Red Eye of Azathoth patron project for the Call of Cthulhu system is screaming right along! The denizens of Leng have uncovered a powerful spell, millennia old yet never cast, which will summon the Harbinger Star comet from the heavens and cause it to strike the earth.

The Harbinger Star is one of several celestial flutes spinning through space, their alien harmonies the only thing which keep dread Azathoth locked into his eternal slumber. The only saving grace humankind has is that the spell is divided into 5 distinct parts, known among Harbinger Star afficionados as the “Five Darkest Rites.” As the denizens of Leng race to complete each rite, champions will arise across time to defeat them—the tally of their successes and failures determining the fate of the world itself. Tied together through the mad ravings of an ancient chinese prophet, the players will take on the roles of investigators throughout several key ages of human history, reincarnated time and again to stop the denizens of Leng, uncover the truth of the prophet’s ravings, and uncover their own mysterious ties to the prophet and each other.

Reincarnation meets prophecy. Fate is pitted against free will. Armageddon in the background.

Hey, it’s all fun and games until someone gets their eye poked out with a world-destroying comet.

I’m pleased to announce that this anthology, comprised of 5 adventures, is coming together quite nicely. We already have the following to look forward to, with more groundwork being laid daily.

1) “That Which is Dead Shall Refuse to Lie.” The introductory adventure, where the investigators might play as either Vikings or monks in 887 AD, will be penned by none other than fan favorite author, Tim Connors. The Isle of Lindisfarne is in grave trouble, and St. Cuthbert’s bones hold the secret to the first of the Five Darkest Rites.

2) “The Silence of Thousands Shall Call to Him.” The second adventure takes place in Japan in 1287 AD and will be written by project patron Michael Furlanetto, whose adventure pitch won the majority of patron votes. The denizens of Leng are stealing villagers’ voices using means best left unknown and plan to unleash the harmony of their collective silence to complete the second Darkest Rite. As the players take on the role of honor-bound samurai, will the steel of their katanas and the speed of their wits be enough to foil this scheme?

3) “Fires from Heaven Shall Stain the Skies.” I have the pleasure of writing the third adventure, taking place in 1487 AD in Valencia, Spain, during the fervor of the Spanish Inquisition. Archbishop Esteban del Cassandro has been tasked by King Ferdinand to either convert or rid Valencia of its Moors before Valencia merges with his new Spanish Empire. The Archbishop couldn’t be happier, as this provides the perfect cover for burning an entire mass of people at the stake, completing the third Darkest Rite before the very eyes of the Valencian public in a horrid spectacle, all with the Catholic Church’s official blessing. As either agents of the church suspicious of the archbishop’s motives, or Moors seeking to save their people, will the investigators uncover the archbishop’s plans in time to stop him?

4) “A Cold Shadow Shall Swallow Man.” Pitches for the fourth adventure in the anthology will be voted on by patrons next week. Taking place in 1587 AD in the colony of Roanoke, we will uncover what happened to the lost colony and, hopefully, shed some light on what “Croatoan” really means. As if that weren’t enough, fan favorite authors Stan! and Richard Pett will be among the authors anonymously pitching and vying for patron votes this round. This round promises to be incredible!

5) Last but certainly not least, the patrons are currently brainstorming various aspects of the project, reviewing and commenting upon the manuscript for the first adventure (communicating directly with Mr. Connors about what they would like to see), and they are deciding what will be included in the anthology’s appendix. Player handouts? Pre-generated characters? Historical background information? New mythos spells? A new skill for Call of Cthulhu gaming, dealing with drawing upon experiences from past lives? Only the patrons know, and their votes will determine what goes and what stays.

The project is shaping up to be amazing, comprised of 5 stand-alone adventures that can be linked together for a greater play experience. Call of Cthulhu gaming will never be the same.

Join me in praise to Good King Azathoth.

1 thought on “The Red Eye of Azathoth: a Public Report”