Skip to content
Home / Delve into the Depths in the Kobold Blog / The Grand Duchy: Intrigues from the Current Season at Court 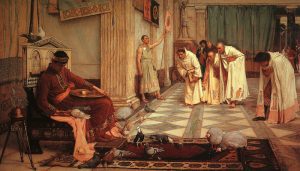 Every season brings a fresh round of disputes the Imperial Court must entertain. Feel free to use them as scenarios for roleplaying-focused sessions or as seeds for adventures across the Grand Duchy.

Here, then, are the petitions large and small brought to our Beloved Imperatrix, Regia Moonthorn Kalthania-Reln van Dorig.

Rings to Rule Them All

Her Majesty was asked to mediate the 326th dispute between the Ringsmith’s Guild and the Guild of Wondrous Creators. The issue is whether either group should have a monopoly on the crafting of toe rings, torcs, armbands, earrings, circlets, and the latest rage in resurgent fashion—tiaras. Item quality and expense are two sticking points.

The petition includes examples of magic items that best represents each group’s work in the various categories of adornment.

The Beloved Imperatrix has commanded the items be displayed so that her subjects can take pride in her artisans’ accomplishments.

Her unspoken intent, however, is so foreign emissaries can be awed by their magnificence and other ne’er do wells might be tricked into revealing themselves by rash attempts at thievery.

Stars to Steer By

Court astrologers, seers, and other diviners from across the Grand Duchy have assembled for a special reading for the Beloved Imperatrix.

Courlandia’s chief astrologer, Cansu Fulden, was chosen by lot to lead the conclave (though whispers have already started; this is the seventh straight year her rune was chosen from the pile).

Because the assembly features so many powerful spellcasters—especially those with nefarious reputations and questionable loyalties—the Lord Arcane required each to swear an oath on a binding rod not to practice anything other than divination magic during their time at court except by command of the Beloved Imperatrix herself.

Cansu tsked at this “silly requirement,” immediately collapsed and fell into a trance, where she uttered a fearful prognostication:

The Fishing League of Donnermark and House Leofwine are in dispute.

The League wants crown authorization to ply its trade deeper into the Neider Strait (essentially seeking assurances of military protection if they are caught dropping nets off Northlander shores).

House Leofwine, acting as a proxy for Van Rottstens of Bad Solitz, advises this is a highly provocative action. It will only antagonize the Northlanders and will deplete those otherwise rich fishing waters.

Eyebrows were raised when the Van Rottsten herald, Aymoneta Star, broke with the rest of Bad Solitz and sided with the Fishing League. When asked, Aymoneta replied: “You can’t eat diamonds.”

What We Need Is Love …

Randolf is the adult teen son of a powerful Donnermark merchant, assigned to the Twinned Cathedral for his education. On his own merit and fidelity, he has become an acolyte in the faith and a secretary-confident to Saintmistress Rowanmantle in Reywald. As a result, he is aware of her ambitions for the Tomierran Forest.

In Reywald, he fell in love with an adventurer-wizard, the fair Julienne, unaware that she was a scion of House Aldous-Donner and regular member of her uncle’s unauthorized” expeditions to the old ruins.

News of the affair broke at court. The rival houses have brought immense pressure on the youths to end the affair. The lovers meet secretly and resolutely make their vows to one another. Friends of each have been challenged to duels of honor, involving even one of the Imperatrix’s own great-great-great grandnieces who is an adventuring companion of Julienne.

There is an unconfirmed report that the Saintmistress has paid a visit to an apothecary.