Skip to content
Home / Delve into the Depths in the Kobold Blog / Places to Go, People to See: The Murghren Bazaar 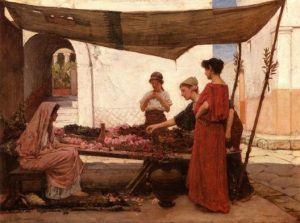 The Murghren Bazaar is the largest market in the known world. It might even be the largest in any world, but who can confirm such speculations? It is contained within the towering, long-abandoned hive of an extinct species of termite. The place, constructed from earth and sand, is remarkably resilient, scarcely having been eroded in the thousand or so years of its existence. Each of the endless passages has a smooth finish like that of marble. Now, the towering hive swarms with a different kind of life: teeming masses of merchants.

It is said of the Murghren Bazaar that gods visit it to see the wonder of their creation concentrated into a single place. Within the crowded corridors, everything is for sale—the most ancient and secret of magical texts are lying in occluded corridors, forsaken and forgotten by a trader with too much on his mind to care about one, single, musty tome. Mythical weapons can be discovered in smoke-choked chambers, where hundreds of blacksmiths and artisans compete to match each other’s skill and craftsmanship.

Thieves prowl here, of course, attracted by the wealth hanging from the belts of those who have haggled well. But most thieves are too afraid of the guards who lurk beneath the tunnels—horrors called Burrowers that no one has ever seen, save for the sight of an enormous clawed hand stretching out from ravaged earth to pluck a criminal out and drag him or her into the fetid darkness. The Burrowers will attack anyone who has been seen to commit a crime; they do not care about motive or mitigating circumstances. How they know who has committed a crime is impossible to tell, though there are rumours of certain cracks in the walls of the Bazaar that can be whispered into, and something vast and unseen listens.

1 thought on “Places to Go, People to See: The Murghren Bazaar”