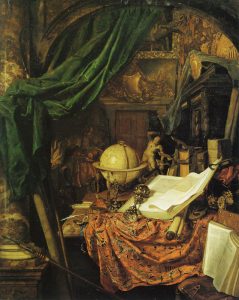 Deep, exhaustive knowledge of the functions, shapes, styles, structures, and topologies of the medieval city is, irritatingly, not enough to guarantee the birth of places as unique, believable, and awe-inspiring as, say, Tolkien’s Gondor. Such feats of the imagination are indeed rare, but knowing where to draw upon, not being afraid to allow the rich history of cities to inspire you, and understanding the basics of medieval urbanism are a solid foundation for your inspiration to flourish upon.

Besides, convincingly recreating the historical yet highly evocative urban imagery and civic life of the Middle Ages can sometimes be more than enough. Adhering to the essence of the era’s geographies, values, economies, and structures, is usually all the more effective with the addition of elf sorcerers selling charms in marketplaces, claustrophobic dwarven taverns, and supernatural beasts hiding in the crevices of dark, dirty roads. Add in a few very special, not essentially realistic structures—a wizard’s tower, an extensive underground network of tunnels—and a halfling ghetto, and you can have an exotic yet sensibly functional settlement that could be on par with Bree.

The difference from entering the ornate and wonderfully detailed metalworkers guild to merely visiting your run-of-the-mill weapons dealer should be reason enough to bring such elements into your campaign. Running into journeyman-master arguments regarding prices and quality, catching a glimpse of a furnace in action, listening to children running around somewhere upstairs, and choosing from a rich variety of expertly constructed weapons, tools, and armaments, is such a richer, more whimsical experience than simply grabbing something off a glorified vending machine. And that’s before even considering how different a guild run by semi-civilized Orcs would feel and its influence on the human urban fabric around it.

More extensive urban modifications, and closer adaptations of the medieval city to a fantasy settings, could allow for even more intriguing geographic dialogs, fundamentally reshaping both the historical urban environment and its hinterland to create places with no previous equivalent. 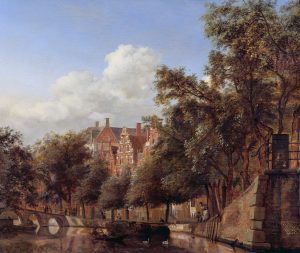 To achieve this, you will have to think up of entirely new civic functions or heavily modify existing ones. If for example Catholicism, a defining core characteristic influencing central functions of the medieval city, were to be replaced by the worship of an ancient demon or a god of war, the changes to cathedrals, the institutions built around them, and everyday life would be profound. Similarly, being at constant war with hordes of goblins would probably have the guilds re-align their productive efforts, while new, stronger ramparts and more barracks would have to be  constructed. Mages could also roam the walls fixing collapsed sections with the help of their golems, which would require places for their maintenance and production, and so on and so forth.

Also, what if a covertly evil monarch declared peace throughout the realms and demanded all walls to be torn down? Or to address otherworldly matters that do not lead to relatively banal realities, what would a city created to keep the living out and to service ghouls and vampires look like? Would the undead sustain a society, or would their necropolis become a crumbling, haunted version of a formerly vibrant town complete with stables of living things to prey upon?

As for your most elaborate city, the capital city of a sorcerer’s kingdom for instance, it could be an eclectic creation that molds medieval urbanism to its needs, while retaining the aspects that make it recognizable and effective in fantasy world-building. Complexity, ornate facades, winding narrow roads, and tall imposing buildings, all structured around a strong central idea can lead to something as beautiful as Planescape’s infinite Sigil or the aforementioned Gondor. Of course, a central idea could start off as something rather vague too: even “a city were werewolves and hobbits can peacefully co-exist and combat magic by operating an ancient loom in their central square” could work.

To make designing, mapping, and crafting a city easier, especially when relatively inexperienced in urban planning, one could use a pre-existing city as a blueprint. Better yet, combine elements, sub-areas, landmarks, and structures from familiar urban environments that can fit together into a brand new whole. Famously, Terry Pratchett’s Ankh-Morpork was based on both Tallinn and central Prague but also utilized certain elements of 18th-century London, 19th-century Seattle, 20th century New York, and traditional Discworld lore.

The option of creating a fantasy city from scratch is always available too, provided you are willing to put in the effort. Following the logic guiding medieval urbanism and working around one or several centers (these could be castles, marketplaces, cathedrals, etc.), one can start creating something utterly original. Preferably by employing a civic founding myth. An almost forgotten King raised by dragons, or the shrine of a god around which the faithful killed the dragon and built their first settlement are fine starting points.

Follow this up with conjuring a wider geography, reach several key decisions regarding your city’s economy, size, modes of transportation, customs, inhabitants, and you should be on the right path. After the basics are done start considering smaller things. What is the prevalent smell in each area? Where do people get their drinking water from? What do marketplaces sell? Where do kobolds live, and, finally, how should you call your burg—do you even have the equivalent of burg in your mystical made-up language?