Skip to content
Home / Delve into the Depths in the Kobold Blog / PaizoCon 2015: A Brief Jaunt into Gravebinder’s Daughter 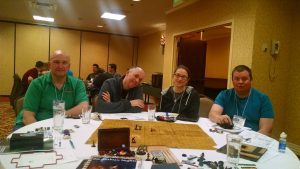 This year, the Kobold Press crew attended and ran events at PaizoCon. Adam Roy, one of the GMs, shares a bit of his experience with us.

Gravebinder’s Daughter, a perennial PaizoCon favorite, was run twice over the Memorial Day weekend at this year’s PaizoCon (2015).

The first brave (foolhardy?) band of Northern Barbarians to enter the Necropolis of Siwal treated successfully with the Gravedigger and proceeded on his suspiciously helpful advice to the Grove of the Black Palms, where they battled the Owl Woman and her fiery minions into retreat. Following other clues, they ascended the hill to the Sultan’s Crypt Palace, where they initially mistook the mysterious and spooky Larissa and her furry friends for the missing Daughter. Having unsuccessfully treating with her for more information (but leaving with their skins and souls intact), they investigated the Mourner’s Hall next and battled a furious ghost, sending it to it’s final rest (?). Upon further search of the foreboding grounds of the Necropolis, they heard the screams of a young woman, who turned out to be Ayisha, the Gravebinder’s daughter they were seeking. She was being held in durance vile by the Black Magus and his hungry undead minions, so the party plunged into battle and destroyed the loathsome creatures and drove off their dark master. Unfortunately, in the battle, the Magus managed to cast feeblemind on the party’s Tengu wizard, who spent the rest of the battle (and adventure) squawking “Tengu bite!” and trying to snap at enemies with his beak. Alas, Ayisha was also killed by the dark magics of the Black Magus, so a sorrowful party had to take her beautiful but broken body back to her father, the humble Gravebinder…

The second party attempting this same daring nighttime rescue was both more and less successful. They fought the Gravedigger, chopping off his head, and leaving his head and body laying next to each other (more on that later). They treated successfully with both the Owl Woman and Larissa, but fled the Mourner’s hall when the furious ghost appeared. They made quick work of the Black Magus and his undead minions and rescued Ayisha alive from his clutches, but just as the battle ended, TWO Gravediggers appeared, angry at having to regrow a new head AND a new body. The party used magic to snatch up Ayisha and flee with her to her father’s side, but the two slowest members of the party (the Clockwork Oracle and the Dwarven Paladin), were caught and stomped by the rampaging Gravediggers. The rest of the party returned at daylight to find only blood and oil stains upon the dark sands, not knowing if their friends had been killed or captured…but that is a story for another time, effendi…

Watch this site for news of next year’s PaizoCon so that you can see what events and seminars the kobolds are planning—we hope to run many more such events as the one above!