Skip to content
Home / Delve into the Depths in the Kobold Blog / Book Review: Buried in Angst 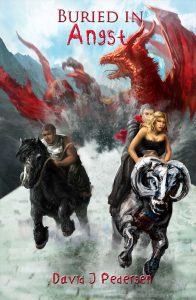 Your dreams have come true, you became the knight and hero you always wanted to be, you saved the kingdom, and you have a child on the way. For most folks, this would be enough. For Angst, though, there is no happily ever after. There is just more . . . Angst.

They say be careful what you wish for, and it couldn’t be truer for Angst. He didn’t realize that being a hero is a full-time job. Just because you saved the kingdom once doesn’t mean you won’t have to do it again and again and maybe just once more after that—just to be sure. Last time around, Angst succeeded at his task by breaking the bond with the sword that made him a hero. This time, though, an entire coastal city has disappeared—I mean completely fallen into the ocean. Gone. Angst is sent away by the queen to determine what caused the city to disappear and finds out the elements are gearing up for their every 2,000-year version of family feud—only it is full contact and humans are in the way.

To add to all this, Angst is dying slowly because he broke his bond to his now-stolen sword Chryslaenor, and no one can figure out how to save him. Another wrinkle: One of Angst’s dear friends Rose is missing. On top of that, there’s a new kid in town trying to usurp the throne, the warring elements are mad at Angst, and even Princess Victoria, Angst’s biggest fan, has grown angry at Angst for his incessant flirting. This novel is truly a midlife crisis in medieval times.

Pedersen is at it again, bringing us Angst who, while technically could be called an anti-hero, is more of a not-so-much hero. Sure Angst gets moody and has some darker moments, but Pedersen has been very careful to keep Angst from becoming a dark knight, and for that I’m thankful. I am a big fan of Pedersen’s choice to use a more modern voice in his books, and, as funny as Angst can be as a character, he is far from a joke.

This book did suffer from being released so far after the first book in the series. Several people have recommended re-reading the first book before jumping into this one, and I completely agree. Pedersen tended to make some assumptions about the reader’s knowledge or memory of the first book and the characters involved, and it took me a few chapters to get re-acquainted with Angst’s crew and some of the events that transpired in the last book. On the up side, this book is clearly labeled as the second book in a series, and the reader doesn’t need to do thesis-level research to figure out what order the books in the series are in.

One of the things that I had almost forgotten was just how uncomfortable Angst’s decision-making and flirting could be to me as a reader. Please understand that is not a negative comment; it is actually a compliment. Pedersen’s writing about flirting and poor life choices is like Stephen King’s writing about horror. Pederson creates situations for Angst that made me want to jump up and down and scream, “Just leave, Angst! Just turn around and walk away!” Angst also has the curse of thinking like a hero, but neither the tools nor the talent to pull it off. In fact, his bond with the sword Chryslaenor was the only time he ever had the tools, and he had to break that bond to save everything he loves.

This book takes a much more sinister turn than the last book did. We see much more intrigue and much more combat. The fight scenes played out really well, and Pedersen continues to improve this aspect of his writing. Several scenes had the characters running all over colossal creatures, which was very reminiscent of a few video games I’ve played. To be fair, what would you expect someone who is fighting the elements to face? Fuzzy bunnies? The intrigue in this book added a whole different dimension that really filled the story out. The problem was that some of the early assumptions that Pedersen made with the characters spilled into some of the machinations of the characters involved in causing the intrigue. I understand that authors need to build suspense and that in a series of books the mysteries shouldn’t all be revealed, but I felt like Pedersen should have trickled out just a few more clues to keep the reader hooked. At times, I felt like the intrigue was rushed and even forced. It almost seemed like Pedersen was actually writing the next book in the series at the same time that he wrote this one and had to go back to include some clues to support things that will happen in the next or subsequent installments.

Buried in Angst is a marked improvement over its already outstanding predecessor Angst. Pedersen has stayed true to his vibrant characters and has widened the focus of the story to let the reader get to know even more interesting and exciting people and locations. Additionally, Pedersen’s view of dragons was different—a fiery breath of different. I think that Pedersen has an epic tale to tell, and Buried in Angst shows that he is getting better at telling it. Minus the assumptions, I had no complaints. I think you’ll find that Buried in Angst is almost an exercise in gallows humor, too, because the characters are in the most dark and morbid situations, and they still crack a joke. As a character, Angst quickly wormed his way into my heart, and with this next installment he has worked his way in even farther. I can’t wait for the next book—I hope it comes sooner rather than later.