Skip to content
Home / Delve into the Depths in the Kobold Blog / Out of the Frying Pan: A Trip to the Coast

Trouble rises in the jungle as territorial hostilities between the kryt and cueyatl disrupt the operations of the local zinjs (or farming communities) along the Spice Coast. Conflict in this guerrilla war continues to flare as the conflict zones shift eastward toward the coast. Low on men, money, and morale, some local beys (or leaders) have enlisted or compelled service and support from specific organizations, freelancers, and “friends-of-friends” from the nearby islands.

Perhaps PCs joined the exodus of professional adventurers, ship captains, and foreign mercenaries, searching for opportunities in the jungles of the mainland. Are characters transporting supplies or information from the coastal plantations to “caretaker” basecamps? Or do they exploit recent confusion and conflict, smuggling zinj escapees upriver to Azadi safehouses deeper in the interior?

Encounter 1: Welcome to the Wungo 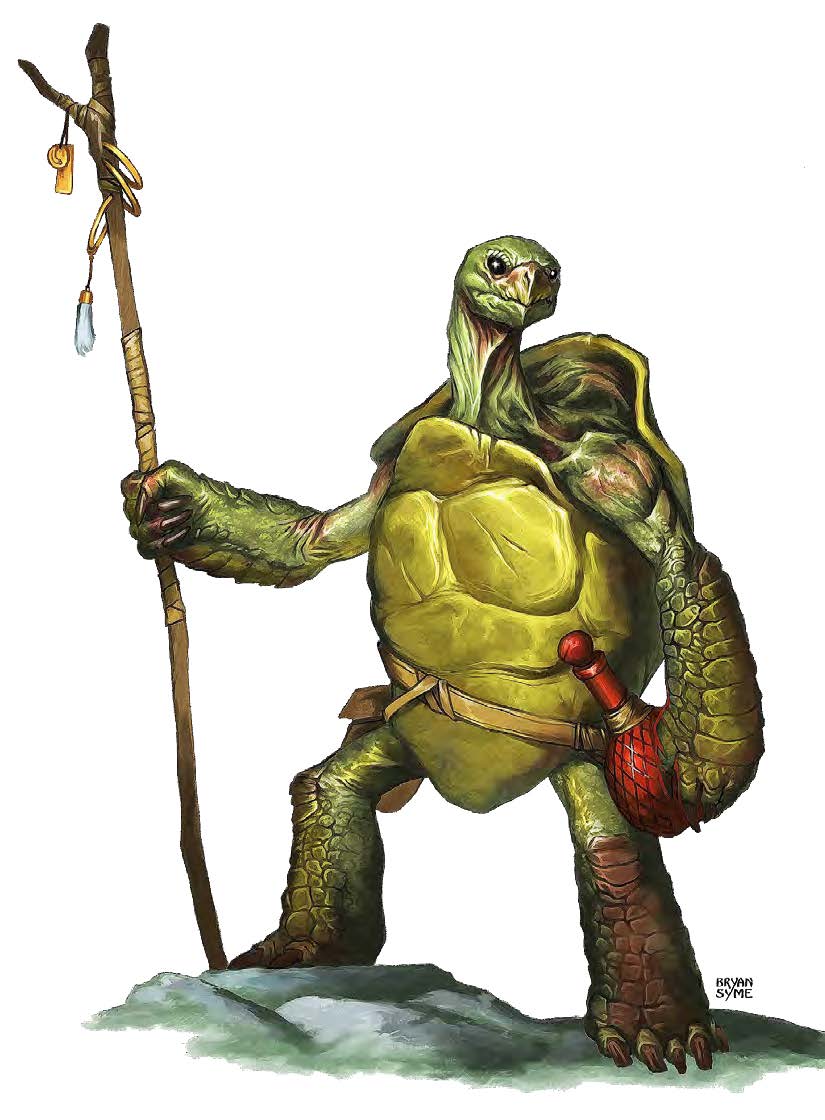 The olive waters of the M’longa River meander languidly, sluggishly cutting a serpentine course through the Wungo Jungle. On either side, lush rainforest flourishes to the water’s edge, arching high overhead. The dense canopy encloses the M’longa in a diffused, cathedral-like embrace. The verdant branches and sun-lanced shadows are lively with vivid plumage and multi-hued commotions of exotic birds accompanied by squawks, hoots, and howls of unseen arboreal jungle life.

PCs currently paddle and pole upriver in large dugout canoes, making good headway against the M’longa’s deep but leisurely current. Accompanying the adventurers (at GM’s discretion) are several hirelings (perhaps escapees), serving as oarsmen and overland porters. Each canoe is 20 × 5 feet and accommodates up to five Medium creatures (two oarsmen, fore and aft, and up to three passengers “amidships”) with supplies, travelling 1.5 mph upriver, 3 mph downriver.

Midway through day two, you’ve navigated to well within your maps colored “caution zones.” Eyebrows raise, but no one comments when the constant chattering and trilling of the jungle is suddenly hushed, practically confirming the long-anticipated presence of hostiles. Ahead, almost on cue, two lifeboat-sized crocodiles slither into the river and bear down on your little flotilla before submerging. Shouts of alarm erupt from behind you…

Developments. Unwittingly interrupting a kryt-subek ceremony, PCs are approached from upriver (100 feet) by two submerged giant crocodiles, two kryt (see Creature Codex), and three subek (see Tome of Beasts). A second pair of giant crocodiles has surfaced and approaches from 30 yards downriver (behind them). Astride each rearward giant croc stands one kryt and one kryt river shaman (use kryt, changing first shaman’s quarterstaff to a staff of control water [as the spell 1/day] and the second shaman’s to a trident of fish and reptile command).

Allow 5 rounds of combat as the subek, kryt, and crocodiles attempt to come adjacent. If the battle goes against the reptiles before round 5, they will stall for parlay as long as one kryt survives. Either way, after 5 rounds (GM’s discretion), another warband of would-be-masters of the M’longa arrives.

Any critical hit against or action, effect, or condition causing canoe-borne creatures to be knocked prone, grappled, or moved more than 5 feet in one action requires a successful DC 14 Dexterity (Acrobatics) check to avoid going overboard. Once combat begins, any non-reptilian creature entering the water is attacked by 1d4 + 1 swarms of quippers per round until pulled back into a canoe (DC 14 Strength check).

If both oarsmen (per canoe) become incapacitated, impaired, or use actions other than to control canoes, those boats immediately begin a slow-spinning backdrift downriver. GMs should track canoe movements with and against the current, noting rotations and facing changes should PCs or NPCs lose control, go overboard, and so on. The M’longa averages 120 yards wide by 40 yards deep. 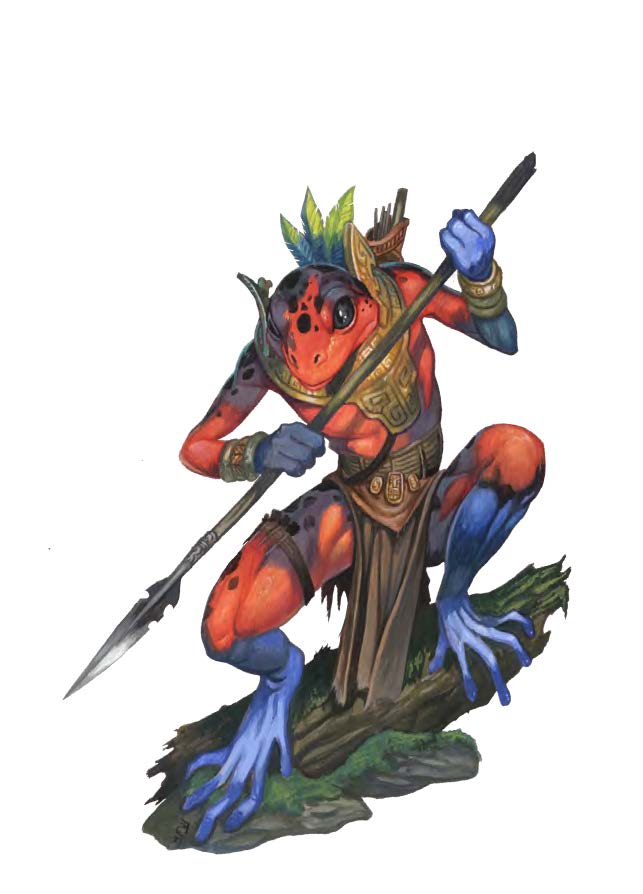 Encounter 2: A Day at the River

Banking around a bend upstream, three bat-winged, frog-like monsters fly into sight, swooping and gliding under the forest canopy, ridden by plumed and war-painted cueyatl warriors. Below, skimming the river’s surface, a wide, undulating mat of woven river reed and jungle vine slowly approaches, bearing a trio of disquieting figures. A hunched, hag-like crone sits cross-legged, wearing moldering, despoiled finery of a one-time jungle priestess or medicine woman. To her right looms a hulking, ogreish-thing of massively knotted fronds, branches, and vines, festooned in vibrant medleys of orchid, lotus, and jasmine. The final carpet-rider is a willowy, faceless figure, wearing a slim sword and slender robes. With a flourish, the last figure disappears from sight.

Developments. Three water leapers (see Tome of Beasts), 150 feet upstream, fly toward PCs, each ridden by one cueyatl moon priest, one cueyatl, and one cueyatl warrior (see Creature Codex). The water leapers stay airborne, circling and divebombing, and cueyatl warriors leap down at canoes while the moon priests and other cueyatl rain down spells and poison spears. Riding alongside the river witch, Auntie Maime (use blood hag, see Tome of Beasts), is her lotus golem (see Creature Codex), and Vulthrys’x, the (now invisible) ultraloth. Auntie Maime hangs back, observant as her minions and allies advance to attack the kryt and PCs.

Non-reptilian creatures (including cueyatl) entering the river now suffer attacks from 2d4+1 swarms of quippers per round. 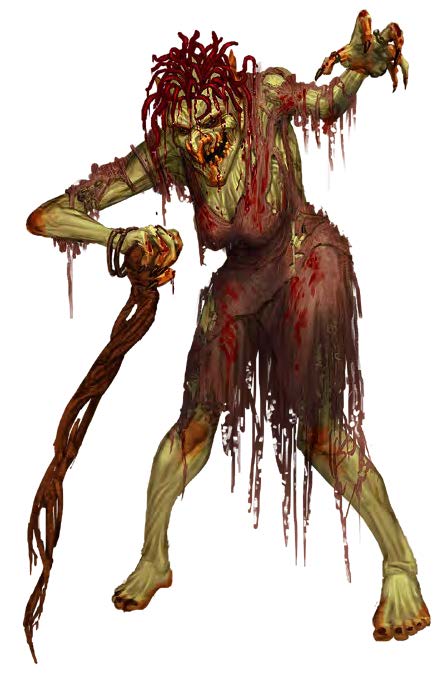 After a GM-determined number of rounds, one kryt (perhaps surfacing from below, clambering aboard a crocodile or the riverbank) is spotted opening a wax-sealed jar, withdrawing a long, shimmering green snakeskin. A droning, alien voice is heard, crying out in Infernal, “Auntie Maime, there! The fetish!” The hag shrieks back in Infernal, “Vulthrys’x get it! We stop him, or the pact’s void!”

Developments. Auntie Maime attacks if not already engaged. The ultraloth, scimitar drawn, reappears 10–40 feet from the prayer-murmuring kryt, now dangling the fetish over the water. Events can go many ways here based on PC/NPC positioning and actions, but if (when?) the fetish touches the river…

The river begins to heave and pitch, vast clouds of sediment churn and boil up from the riverbed. Just as suddenly, everything calms—until immense shadows appear within the water. Breaching explosively, two draconic forms surface, each with three long-necked heads thrashing about and savagely attacking. Two zmey (see Tome of Beasts) attack all non-reptilians.

Non-reptilian creatures entering the river now suffer attacks from 3d4+1 swarms of quippers per round.

PC options truly present themselves here. Can they stomach alliance with hags, fiends, and frogs? Or risk parlay with the kryt or their mad M’longa river gods. Do they need too?