Skip to content
Home / Delve into the Depths in the Kobold Blog / Beyond Damage Dice: Hammers and Bludgeons 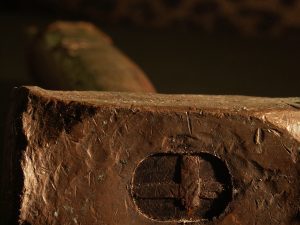 Chain Garrote. While wielding a flail, you may attempt to grapple a creature by looping the chain of your flail around its neck. While grappled in this way, the creature cannot speak, cannot breathe, and has disadvantage on attack rolls against you. If you surprised the creature with this grapple, it cannot hold its breath and immediately begins suffocating (see “Suffocating”). Creatures that you cannot grapple or do not need to breathe are unaffected by this maneuver.

Shield Snare. As an action while wielding a flail, you may make a single attack roll against a target carrying a shield or a similar defensive tool. This attack ignores any bonus to AC granted by the shield and deals normal weapon damage. If the attack hits, the target must also make a Strength saving throw. On a failure, its shield is pulled from its grip and lands at its feet.

Crushing Blow. As an action, you can make a single attack roll with your maul against an armored or naturally armored creature. If the attack hits, the target’s AC is permanently reduced by 1 until its armor is repaired, but it cannot be reduced below 10 + the target’s Dexterity modifier. This attack has no effect on creatures with magical armor unless your maul is also magical.

Hurling Impact. As an action, you can make a single attack roll with your maul against a Medium or smaller target. If the attack hits, it does normal weapon damage, and the target must make a Strength saving throw. On a failure, the target is pushed up to 15 feet away from you.

Piercing Point. As an action, you may pinpoint a weak point of an opponent’s armor and make a single attack with your war pick against it. This attack pierces armor, treating the target’s AC as 10 + their Dexterity modifier. On a hit, this attack does normal weapon damage.

Trip. As an attack while you are wielding a war pick, you may hook your opponent’s leg in an attempt to trip them. Make an attack roll against a Medium or Small creature. If the attack hits, it must succeed on a Strength saving throw or fall prone.

Bruising Blow. As an action, make a single attack roll with your warhammer against a living creature. If the attack hits, it deals normal weapon damage, and the target must make a Constitution saving throw. On a failure, the target does not add its Dexterity modifier to its AC until the end of your next turn or until it is treated with a DC 10 Wisdom (Medicine) check.

Sundering Strike. As an attack, make an attack roll with your warhammer against a creature wielding a weapon, including natural weapons. If the attack hits, the weapon is damaged, and all attacks made with this weapon have disadvantage. Another sundering strike destroys the weapon. This attack has no effect on magical weapons unless your warhammer is also magical.

8 thoughts on “Beyond Damage Dice: Hammers and Bludgeons”