Skip to content
Home / Delve into the Depths in the Kobold Blog / Alternative Adventures: The Heist 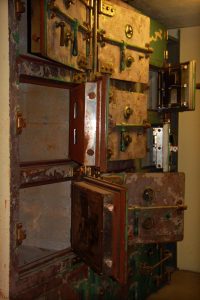 Do your adventures always seem to hit the same notes? From goblin caves and kobold warrens to haunted castles and dragon lairs, we always seem to go back to the same fights and the same dungeon crawls. While the map might be drawn a little differently this time and you’re adventuring with a different party, it can all blend together after a while. Sort of like when a popular song gets covered by dozens of different singers, each take is unique, but deep down, they are all the same.

That’s where Alternative Adventures comes in. This series is here to help you add a bit of spice to your game by introducing elements beyond room-by-room combat and hall-by-hall trapfinding.

Elements of The Heist

The Macguffin, a term coined by Alfred Hitchcock, can be anything. It might be an item of eldritch power, a cart load of diamonds, or a collection of ancient manuscripts, but the item itself isn’t what matters. The story surrounding the item, in this case all the time and effort that’s going into stealing it, is what matters.

The Walls are equally flexible when it comes to what they are. For example, they might be actual walls, in the event the Macguffin is being held inside a fortress or prison of some sort. However, the Walls might be the fact that the Macguffin is under constant guard or that it can only be reached during certain days of the year. The particular form the Walls take don’t matter as long as they are a challenge for the party to overcome as a group, as long as it’s something that can’t just be taken head on. The point of the Heist is that you have to go around, under, or over, and you can’t simply go through it and expect to succeed.

The Stages of The Heist

The first stage of the Heist is assembling a team. This means you need to come up with some reason that every member of the party is recruited and brought on board for the Heist. If they are a team that’s done this kind of thing before, a former contact can quietly slip them the word about an opportunity. Maybe, they’re a bunch of individuals with certain skills, and an NPC brings everyone on board individually, so now, they have to learn to utilize their abilities as a unit instead of as individuals. It’s even possible that the kingdom rooted out the baddest of the bad from their dungeons to let them work off their sentence and erase the debt they owe through this mission.

The second stage of the Heist is planning. The group should gather information about the target, the security, and any important facets of the operation. For example, the party has to steal the Golden Goblin of Ashtar, one of the prized possessions of the vicious black dragon Gorgoroth. Taking on the dragon in its own lair is out-and-out suicide, but one of the team is an experienced dragonslayer, and he knows from others in the trade that this particular dragon leaves for one day every twenty-five years to attend a mating circle. He leaves spells, minions, and the natural hazards of his swamp lair to guard his treasure in his absence. Once the party knows what dangers they’ll face and gets the lay of the land, they can make a plan for getting in, getting the Macguffin, and getting out in one piece.

The third and final stage of the Heist is the execution. This can be difficult as a GM because you need to balance out the possibility of things going wrong while still giving your players the ability to succeed. For instance, your rogue and brawler have the right uniforms, know the right passwords, and can pass for Red Keep guards, but a bad die roll means that the rogue says exactly the wrong thing right before the two of them get into position. Thinking fast, the brawler knocks out the commander before he can raise the alarm, necessitating tying him up and stuffing him in an out-of-the-way place. Alternatively, the party might be sneaking right through an enemy camp when the fighter’s armor tinks off a stone. One of the NPCs hears it, but as one of the guards starts peering into the shadows, the wizard silently commands his familiar to fly over the area, crowing. The NPCs shake it off as a bird doing what birds do, and the party is able to keep crawling along.

Careful planning and fast thinking are both necessary for a successful Heist game. The most important element, though, is tension. This isn’t an ancient ruin where the party can retreat if necessary and return to fight another day. This is a situation where, if you don’t get it right now, you’ll have to make an entirely new plan. You may not even have an opportunity for another few decades, depending on the setup surrounding the Heist itself. And, of course, getting caught may lead to a fate much worse than death.

The Whole Campaign, or Just An Arc?

The Heist works best as an arc of a particular campaign, though it is possible for several, smaller heists to lead up to one big one. For example, if you need three separate keys in order to access a vault, then you have to steal the keys in order to even be ready to assault the vault. However, it’s only a matter of time before the dummy keys you left behind are discovered, so you have to move fast before the vault is out of your reach for good.

Lastly, though, it’s important for you to have a contingency plan in case the first attempt falls through. If the party gets caught or captured or something happens where they don’t succeed, make sure that the game doesn’t end there. Create a secondary scenario where they can try again. They might have to start over from scratch and form a whole new plan, but no one wants the campaign to end because of an ill-timed natural 1 on a disable device check.

1 thought on “Alternative Adventures: The Heist”