Skip to content
Home / Delve into the Depths in the Kobold Blog / Of Godly Might: Clerics of Thor (Part 2) 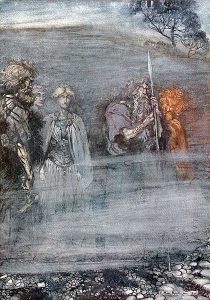 Temples to Thor are few and far between. Worshipers are just as likely to leave sacrificial offerings under stormy skies, lit by bolts of lightning and accompanied by claps of thunder. No need for fancy temple halls when Thor provides displays of his power with every storm that visits Midgard. Particularly well known among Thor’s followers are an elite group of skalds, calling themselves storm strikers, who favor the sonic cleric domain and honor the Thunderer with epic tales of battlefield ferocity.

Storm strikers pay homage to Thor with every spell and every strike delivered, empowering their attacks with electrical and sonic energy to lay waste to the enemies of their god on the battlefield. Storm strikers are far less focused on the academic acquisition of knowledge than typical skalds and instead, like the god they endeavor to emulate, focus on meting out debilitating blows to their enemies.

Class Skills: A storm striker does not get Perform (string) as a class skill. This alters class skills.

Acoustic Attunement (Ex): At 1st level, a storm striker utilizes the knowledge of sound and its physical effects to create harmony in bodily systems which increases the power of healing spells. Storm strikers add 1/2 their storm striker level (minimum 1) as additional points of healing to all cure spells they cast. For the purpose of this ability, a cure spell consists of any spell with the word “cure” in its title. This ability replaces Scribe Scroll.

Words of Wounding (Su): At 2nd level, a storm striker can use the Perform skill (either oratory or sing, but not both; this choice is permanent once made) to activate his words of wounding ability. This ability is activated as a free action in conjunction with casting any spell that inflicts sonic damage. Once activated, its effect is instantaneous; add an additional d6 die of sonic damage to the sonic damage the spell deals. In addition, the save DC for the spell cast is increased by one. This ability may be used a number of times per day equal to 1/2 the number of ranks invested in the Perform (oratory OR sing) skill. This ability replaces versatile performance.

Storm Strike (Su): At 2nd level, a storm striker can use the Perform skill (percussion or wind, but not both; this choice is permanent once made) to activate his storm strike ability. This ability is activated as a move action that does not provoke an attack of opportunity. A storm striker can imbue any type of hammer, held or thrown, with the power to deliver d6 points of sonic damage (if Perform [percussion] was selected) or d6 points of electric damage (if Perform [wind] was selected) in addition to its normal damage for 1 round. If the attack is unsuccessful, the use of storm strike is wasted and has no effect. This ability may be used a number of times per day equal to 1/2 the number of ranks invested in the Perform (percussion) or Perform (wind) skill depending upon which Perform skill was selected to power the storm strike ability. This ability replaces well-versed.

The following traits are useful to clerics of Thor.

As a devotee of Thor, your spells feature dazzling displays of thunder and lightning.

Your parents were devoted followers of Thor; your first rattle was in the form of a meticulously crafted miniature warhammer.

Benefit: You add +1 point of sonic damage with successful hits made with unarmed strikes or any type of hammer.