Skip to content
Home / Delve into the Depths in the Kobold Blog / Monster Monday: Kalikheth, the Bandit Drake (Oxide Drake) 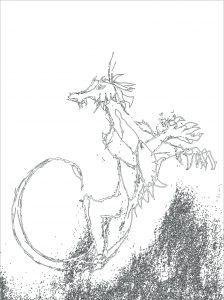 Harsh master of a motley band of desert cutthroats and reavers, Kalikheth is brought low only by his overweening pride and constant cowardice. The drake prefers to create an atmosphere of equal parts fear and greed, and he rewards toadying as much as prowess among the outcast dragonkin and minotaurs that follow him. Kalikheth claims a small section of the western Rothenian plain as his petty-demesne, and he chooses his targets judiciously. Although Kalikheth loves baubles and gems, he values survival much more and will abandon an assault and even allies if the tide turns against him.

Like many oxide drakes, Kalikheth is an accomplished strategist and tactician, but his chief joy is to hide in plain sight by a roadside and pounce upon unsuspecting travelers. Lone wanderers and small pilgrim parties are his favorite solo prey, though he is not above calling out his followers if a particularly juicy trade wagon or underarmed merchant caravan rolls into his hunting grounds.

Cautious in the extreme, Kalikheth begins combat with his oxide blast breath weapon, hoping to catch foes off guard so that he can blind them temporarily. The wily oxide drake cares little for his bandits and often catches them in the blast, which forces them to scatter in the midst of battle. Kalikheth rarely uses his constrict ability because he dislikes close combat and is unwilling to commit to one particular foe. As a result of constant exposure to his breath weapon, “Kheth’s Reavers” wear no metal armor and wield only nonmetal weapons. The lack of metal gear has the added side effect of making them lighter of foot and generally quieter and stealthier.

Kalikheth will, if subdued or captured, gladly give up the location of his lair, a ruined temple on the pilgrimage road between Orkasa and Demon Mountain. Unknown to outsiders or even his allies, the oxide drake has his treasure both trapped and well hidden.

SPECIAL ABILITIES
Breath Weapon (Su) The oxide drake spews forth a blast of red oxide. In addition to the 7d8 damage, those caught in the blast must make a DC 18 Reflex save or be blinded for 1–3 rounds. Any metal weapon or armor coated by the oxide must be cleaned immediately or receive the fragile condition within 1d4 hours.

Undulating Scales (Ex) The oxide drake’s scales are composed of a multitude of layers of alternating light and dark shades. By controlling the orientation of its scales in relation to available light, as a swift action, the oxide drake blends with its surroundings and gains a +8 bonus to Stealth checks as long as it does not move.

Pounce (Su) At the end of a charge, the oxide drake may make a full attack.

Though their name suggests a dusky or oxidized appearance, oxide drakes are in fact creatures of singular, shimmering beauty and a study in deliberative cruelty. Devious in the extreme, oxide drakes command respect as fierce combatants and cunning adversaries. These drakes are wingless, and their excoriating breath weapons blast water particles that blind opponents and coat their weapons in oxide.

Combined with their oxide breath is their ability to blend into their surroundings and make a devastating pounce on the unwary, often attempting to squeeze the life out of them. Master strategists and tacticians, oxide drakes prefer stealth and subterfuge to open fighting, and, as survivors, discretion is always the better part of valor because these drakes recognize no valor. Oxide drakes loathe adamantine since it overcomes their resistance to normal weapons; wielders of such weapons are targeted with extreme prejudice.

Competing with crag drakes ecologically, oxide drakes differ markedly from those mineral-loving drakes in that they prefer their own company. Two oxide drakes rarely inhabit the same area for any purpose other than to mate. In fact, it has been argued that oxide drake males fear both other male and (perhaps even moreso) female oxide drakes. The females’ propensities for vile deception and cowardly assaults gives male drakes pause. It is perhaps a blessing that oxide drakes show such antipathy for their own kind because they are vicious and successful predators.

Most oxide drakes prefer the warmth of desert and jungle locales, but they have been sighted as far north as the Swiving Bay. Preferring a burrow stolen from another creature, these lazy drakes dislike physical labor and are frequently captains of mercenaries or leaders of marauding bands. They utilize such allies as equal parts protection for their lair and, upon occasion, suitable replacements for missing meals.

An oxide drake’s articulated and undulating scales are striking after a menacing fashion. When angered or enraged, the scales pulsate, creating a scintillating display of shifting shades. Standing between 7 and 8 ft. at the shoulder and measuring generally 12-15 ft. in length, oxide drakes are lean and lithe, averaging 900 pounds in weight. Oxide drakes are highly prized, either alive to be trained as difficult but deadly guardbeasts or dead by collectors. Despite its rusting breath weapon, an oxide drake’s magnificent scaled hide makes a wondrous suits of shimmering armor that affords its wearer excellent articulation and maneuverability. Oxide drakes are material drakes.