Skip to content
Home / Delve into the Depths in the Kobold Blog / Objects of Odyssey: Magic Items from Classical Literature 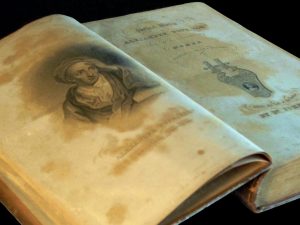 The Odyssey, an epic poem written thousands of years ago by Homer, is one of the first examples of fantasy literature, complete with the mythic-but-human hero Odysseus and the classic monsters of the harpy and cyclops. And of course, magic items. Two of these are particularly important in the narrative: the bowl and wand belonging to Circe the Witch. Here, we detail them for 5th Edition.

Wondrous item, rare (requires attunement by a warlock with a Charisma score of 20 or greater)

Milk newly press’d, the sacred flour of wheat,
And honey fresh, and Pramnian wines the treat:
But venom’d was the bread, and mix’d the bowl,
With drugs of force to darken all the soul:
Soon in the luscious feast themselves they lost,
And drank oblivion of their native coast…

This powerful goblet was a gift bestowed to Circe by her divine parents Helios, the god of sun, and Hecate, the goddess of magic. The witch used it for gaining great authority over natural phenomena and human minds, including the weak souls of Odysseus’s companions.

The bowl is an exquisitely crafted red ceramic cup, incised with black figures depicting lions, wolves, and fruiting plants. The goblet has the Fey special feature and glows with a pale radiance in moonlight, shedding dim light in a 5-foot radius. It has also the following additional properties.

Spells. The bowl has 16 charges. While holding it, you can use an action to expend 1 or more of its charges to cast one of the following spells from it: animal friendship (1 charge), conjure animals (3 charges), dispel magic (3 charges), conjure woodland beings (4 charges), and modify memory (5 charges). The bowl regains 2d4+8 expended charges daily at dawn.

Skilled in herbs of power. You can brew magic potions at half the normal creation cost.

The Feast. You can use an action to speak a command word, whereupon a gallon of milk, wine, olive oil, or honey (your choice) pours out of the bowl. The liquid stops pouring out at the start of your next turn.

Moreover, you can use the bowl to create sufficient food to serve a nine-course banquet for up to 50 people once per day.

The Wand of Circe

Instant her circling wand the goddess waves,
To hogs transforms them, and the sty receives.
No more was seen the human form divine;
Head, face, and members, bristle into swine:
Still cursed with sense, their minds remain alone,
And their own voice affrights them when they groan…

When using this long, dark laurel wand, Circe the Witch is able to rival the gods themselves.

Divine Pact. While holding this wand, you gain a +4 bonus to spell attack rolls and to the saving throw DCs of your warlock spells.

Baleful Polymorph. This wand has 3 charges. While holding it, you can use an action to expend 1 of its charges to cast a modified version of the animal shapes spell from it. The differences are as follows: 1) the duration becomes “Until dispelled”; 2) you can target also unwilling targets, who are entitled a Wisdom saving throw (DC 17) to avoid the effect; 3) the only forms you can choose to transform the targets into are: boar, wolf, lion.