Skip to content
Home / Delve into the Depths in the Kobold Blog / Milton & Magic: Mythical Items from English Literature 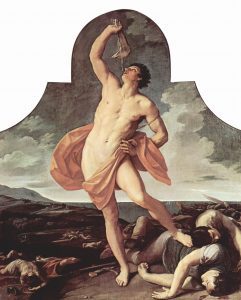 In his tragic closet drama Samson Agonistes, John Milton, renowned author of Paradise Lost, narrates the sorrowful life of Samson, the archetypal barbarian of the ancient tradition. Some mythical items are described in that text. Here we detail them with 5E stats.

The Sword of Bone

Weapon (greatclub), rare (requires attunement by a barbarian with a Strength score of 20 or greater)

“Then with what trivial weapon came to hand,

The Jaw of a dead Ass, his sword of bone,

Samson the Nazirite, in a fury inspired by God, was able to destroy an army of 1,000 Philistine worshippers of Dagon using only the jawbone of a giant donkey as a weapon. A spark of the mighty barbarian’s rage still resides in this unusual object.

The sword is in reality a large club made of yellow-white donkey bone. Some teeth are still planted in it.

You gain a +2 bonus to attack and damage rolls made with this magic weapon. This item has the following additional properties.

Voice of Heaven. When you hit with an attack using this magic greatclub, the target gets an extra 2d10 thunder damage.

Remarkable Fear. You have advantage on Charisma (Intimidation) checks.

The Lock of Hair

Wondrous item, rare (requires attunement by a barbarian following the Path of the Berserker)

“With all those high exploits by him atchiev’d,

And on his shoulders waving down those locks,

That of a Nation arm’d the strength contain’d…”

The godly might of Samson was concentrated in his hair because of his pre-birth vow as Nazirite. His Philistine enemies discovered this secret thanks to Delilah and used this weakness to strip Samson of his strength and capture him. After the capture, the shaven lock disappeared from history, but occasionally, it can be retrieved by heroes adventuring into ancient Dagon’s temples.

The lock has the Heroic Special Feature, so anyone who’s familiar with the item’s history expects great deeds from you. It has the following additional properties.

Great Fortitude. Each time you use the relentless rage class feature after the first, the Constitution saving throw DC increases by 3 instead of 5.

Endless Fury. You cannot die because of the exhaustion levels you suffer when using the frenzy berserker primal path feature.