Skip to content
Home / Delve into the Depths in the Kobold Blog / Objects of Hell: Items from Dante’s Inferno 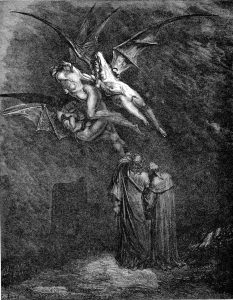 The Rod of the Heavenly Messenger

Rod, rare (requires attunement by a good-aligned cleric or paladin)

“Well I perceived that he was sent from Heaven, and I turned me to the Master, and he made sign that I should stand quiet and bow down unto him. Ah, how full of disdain he seemed to me! He reached the gate and with a little rod he opened it, for there was no withstanding…”

A mighty angel sent by God used this rod to open the gate of the infernal City of Dis, an entrance that was closed and barred by Devils opposing Dante’s voyage. In the hands of a person consecrated to the highest ideals, it can be successfully used to unlock doors and overcome obstacles.

The rod is a small stick made of acacia wood wrapped in thin layers of gold. It has the Gleaming special feature, so it never gets dirty. This item has the following additional properties.

Opener. This rod has 7 charges. While holding it, you can use an action to expend 1 of its charges to cast the knock spell from it. The rod regains 1d6 + 1 expended charges daily at dawn.

Supernatural Instrument. The Rod of the Heavenly Messenger can be used as a complete set of Thieves’ Tools, and when you use it in such fashion you are considered proficient in its use.

“And between the foot of the bank and it, in a file were running Centaurs armed with arrows, as they were wont in the world to go to the chase. Seeing us descending, all stopped, and from the troop three detached themselves, with bows and arrows first selected. And one shouted from afar, ‘To what torment are ye coming, ye who descend the slope? Tell it from there; if not, I draw the bow.'”

This longbow belongs to Chiron, the leader of centaurs that, in Dante’s Inferno, inhabit the Circle of Violence. There, they fire their arrows at any of the damned that try to escape from Phlegethon, the River of Boiling Blood.

Before becoming an infernal guardian, Chiron was the tutor of all the best legendary Greek heroes, including Achilles, Heracles, Jason, Perseus, and Theseus. He trained them in the arts of war, divination, and healing, and those traits are all present in his magical bow.

The longbow is made of dark yew wood and has a string obtained from the sinew of a wild bull.

You gain a +2 bonus to attack and damage rolls made with this magic weapon. The bow has also the War Leader special feature, so you can use an action to cause your voice to carry clearly for up to 300 feet until the end of your next turn. It has the following additional properties.

Spells. The bow has 8 charges. While holding it, you can use an action to expend 2 or more of its charges to cast one of the following spells from it: augury (2 charges), divination (4 charges). The bow regains 1d4+4 expended charges daily at dawn.