Skip to content
Home / Delve into the Depths in the Kobold Blog / Monsters of the Greek Heroic Age: Manticore 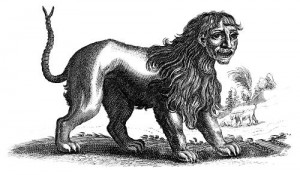 The manticore awaits you beyond the jump.

The manticore (“man-eater”) is a winged monster with a red lion body, a horned human head, and a scorpion’s tail. Barbs cover the length of the tail, and the manticore flings them at its victim at range. The scorpion tail can inject a paralytic poison, which allows the manticore to unhinge its snake-like jaw and swallow its prey whole, assuming it can do so uninterrupted. It has three rows of serrated teeth, much like a shark, and has a voice that sounds like a trumpet.

When attacking prey, the manticore usually attacks from the air, shooting its tail barbs for one or two rounds before attacking from the ground with its tail sting. Although the manticore’s teeth are sharp, they’re used more for swallowing prey than actually wounding it, as the manticore’s mouth just isn’t very large.

Paralytic Venom: When attacking with Tail Sting, the manticore can inject a paralytic poison into its target as a 3 SP stunt. Unless the target succeeds in a TN14 Constitution (Stamina) test, the target is paralyzed for 1d3 rounds.

Tough Hide: The tough hide of the manticore gives it an Armor Rating of 3.