Skip to content
Home / Delve into the Depths in the Kobold Blog / My First Gen Con: Jeff Grubb 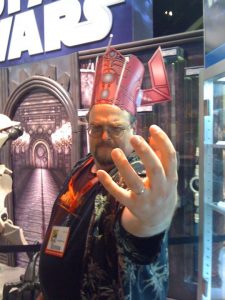 Jeff Grubb sets the Wayback Machine to the golden age of RPGs with his contribution to our “My First Gen Con” series of guest posts.

My first Gen Con was in 1978, at the University of Parkside campus, Kenosha. I regret that I missed the Playboy club the year before, but the idea of capturing an entire (small) campus for a convention, for a GAMING convention was at that time, insane.

I ended up at Parkside as a result of a number of things coming together at once, that strange serendipity that runs through all D&D stories. At the time, I was attending Purdue University, which was a) only two states away, and b) had classes that started the week AFTER the convention. In addition, the family of one of our D&D group’s members owned a house ON Lake Geneva itself. And finally, many of our group had been helping run local convention tournaments and transformed that into working on the D&D Open for the legendary Bob Blake. AND I had a car (a powder blue Cutlass Supreme, why do you ask?) With all that going for it, how could I—and my motley band from the Friday Night Dungeon at Purdue—not attend? …

So the gang (mostly the Purdue group, but with added folk from my Pittsburgh bunch), gathered in Lake Geneva for a couple of days of gaming before the convention proper, then commuted at o-dark early out to Parkside for Gen Con. That first year, the D&D Open was Gary Gygax’s D-series. I ran the first two adventures, but not the final. It was also where I got my first AD&D Player’s Handbook.

What I remember most of all of those early Parkside Gen Cons was the heat. August in Wisconsin was brutal, and the fact that the convention was spread between buildings made it just that much more intense. Years to come would see tornado warnings, robots in the halls, writing the D&D Open one year, the Dragonlance readings, Uncle Duke and the Dragons, and “Kill Orcus with your 1st level character.” And then Milwaukee and another set of memories. But that first convention, going into the unknown, hanging out with friends, that is the one that is always special.

A former civil engineer turned game designer and author, Jeff Grubb has more than a hundred listed credits, including over a dozen published novels and over twenty short stories. He is one of the founding fathers of both Dragonlance and Forgotten Realms, as well as Spelljammer and Al-Qadim. He also served as celebrity judge of the first King of the Monsters contest, which—if you hadn’t heard—has been revived in glorious Technicolor for another go-round! Jeff keeps an online journal with current updates, reviews, and other things at Grubb Street.