Skip to content
Home / Delve into the Depths in the Kobold Blog / Warlock’s Apprentice: Skaldholm Shadowsingers 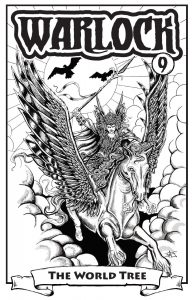 All of the skalds from Skaldholm form a loose network of informants for the Master of Thyles, but there are whispers of a secret organization within the schools: skalds that are as proficient in the art of espionage as they are in poetry and song. Known as shadowsingers, they are artisans whose primary medium is information and secrets, but they are known to slip a dagger between ribs when necessary. They report to the Master of Thyles himself, keeping him abreast of the events (both public and private) from around the Northlands and beyond.

Masters of insight and manipulation, the shadowsingers use every tool at their disposal in pursuit of their goals. Whether it’s leveraging their position as skald to gain access to an exclusive event, singing the praises of their chosen courtiers to curry favor (or damning the reputation of those that displease them), or stealing into private royal chambers after a particularly rousing night of drunken revelry, they can convince their target to give up essential information, thank them for their patronage, and disappear into the shadows before anyone is the wiser.

Shadowsingers owe no loyalty to anyone but the Master of Thyles—not even to each other. Obviously, it’s considered bad form to undermine a fellow shadowsinger (as they all serve the same master and pursue the same goal), but they swear no oath of allegiance to one another, and there’s no distinct chain of command. While some shadowsingers find a second family within the ranks, others hold no love for the other skalds and feel no duty to aid anyone other than their personal allies. This can lead to clashes within the organization, and members that are too disruptive or antagonistic to their fellow shadowsingers find themselves shunned—or they simply vanish altogether.

The shadowsingers have only one codified objective: find the answer to the Riddle of the Forgotten Thing. Whereas other skalds relay rumors they hear during their travels, the shadowsingers seek out knowledge, following the slightest lead, tugging on delicate threads of information until they find the source. Their quest takes them the far corners of the Northlands and even farther into the other kingdoms of Midgard in an effort to uncover what was lost.

Beyond this primary goal, shadowsingers desire knowledge above all else. The more buried a secret, the deeper a Shadowsinger delves to uncover it. Knowledge is power; it can cement empires or topple dynasties. Other than delivering vital knowledge to the Master of Thyles, what each Shadowsinger does with the information they discover is up to the individual—some use it for personal ends while others disseminate pertinent details to the masses—and there are factions within the organization that disagree with their role to play in that regard. Some whisper that this dispute will eventually erupt into a full-fledged schism while others claim the Master of Thyles will step in long before that happens.

Shadowsingers undergo careful training before they’re sent out into the world. Skilled in both music and manipulation, they’re the perfect blend of charm and cunning. The tricks they learn in their tutelage make them ideal for the subtle work of coaxing out secrets, entrancing audiences, and dazzling the minds of their chosen targets.

Bonus Proficiencies: Starting at 3rd level, you gain proficiency with three skills of your choice.

Mantle of Shadows: Starting at 3rd level, you can spend an action to twist the shadows around you for 1 minute or until your concentration ends. For the duration, you gain advantage on stealth checks and you gain the benefits of three-quarters cover as the shadows themselves obscure your passing.

Lover’s Haste: Starting at 3rd level, you can dash as a bonus action while under the effects of Mantle of Shadows.

Cunning Insight: Starting at 6th level, you know exactly where to hit your enemies, so it will hurt the most. You spend an action focusing on a target after which the target must make a Wisdom Saving Throw vs. your Spell Save DC. On a failed save, choose one of the following:

Shadowsinger: Your words are your power. Starting at 14th level, you are a master at weaving stories and influencing the minds of your audience. With the power of one performance, you can make or break someone’s reputation. You spend at least 1 minute performing, relaying a tale through song, poetry, play, or other medium. At the end of your performance, choose a number of humanoids who witnessed the entire performance, up to a number of 1 plus your Charisma modifier. Each target must succeed on a Wisdom saving throw vs. your spell save DC. On a failed save, the target(s) suffers one of the following:

Remove curse or greater restoration ends the effects of this feature. Once you use this feature, you may not use it again until you complete a short or long rest…