Skip to content
Home / Delve into the Depths in the Kobold Blog / Trap Themes (Part 5 of 5): Tricks of the Medusa Demilich 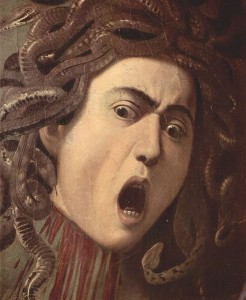 Trap theme templates can be applied to existing traps to give them a distinct and shared flavor.

From her blighted gallery of petrified adventurers and former lovers, the medusa demilich surveys a tomb of most perilous character. A legion of zealous undead and other creatures immune to her petrifying gaze carry out her demands without question, launching numberless schemes to enact revenge on the mortal races that shunned and vilified her in life. The traps she devises to slay those impudent enough to disturb her crypt are engineered in her likeness: they deliver poison and turn the unwary to stone, and they jab their victims with a touch of the anguish, frustration, and isolation she felt in life…

The medusa demilich trap theme helps you to flavor classic traps so that they evoke the most iconic and threatening abilities of both a medusa and a demilich. Poisoned darts and petrifying rays shoot from the mouths of stone snakes carved into the walls, rockslides become an avalanche of petrified dungeoneers’ broken remains, and a flame jet becomes the gaze attack of an exquisitely carved medusa face imbued with flesh-to-stone magic.

Most of the powers and traits are straightforward, such as petrifying and poisonous effects. Others force agonizing dilemmas onto the victims of the medusa demilich’s traps—dilemmas not unlike those she faced when alive.

Skill Modifications: Increase Perception DCs by 4. Additionally, a character can detect and identify a trick of the medusa demilich with a Dungeoneering or Religion check (hard DC).

“See as I see, and know my blessing and curse.”

Apply this power to traps in confined spaces or large melees where affected creatures must balance the fun of turning their enemies to stone with the risk of petrifying their friends. For further optimization, use this trap with enemies immune to gaze attacks or petrifaction.

Cursesight Recharge when no creatures are affected by this power
Trigger—The trap hits with an attack.
Attack (No Action)—Level + 3 vs. Will.
Hit—The target gains the petrifying gaze aura and darkvision (save ends both). The target may cover its eyes to suppress the aura (treat as blinded).

Living creatures that start their turn in the aura must make a saving throw or be slowed until the end of their next turn. If a slowed creature starts its turn in the aura, it is petrified instead (save ends).

When touched, this construct emits a horrid wail that kills living creatures.

Apply this deadly power to elite or solo traps near the end of the dungeon, where healing surges are likely to be in short supply.

Her eyes—they are beautiful. I feel the numbness shoot down through my fingers, across my face; the sting of hardened veins and clotted blood. Still, I cannot look away and must see those eyes one more time before I dream of them in my grave.

Pair traps with this power and powerful, beguiling creatures with gaze attacks—such as a medusa.

This trap turns you to stone.

This classic, evocative trait can be applied to any trap.

The dart from the mouth of the iron snake delivers potent venom.

Like the petrifying trait, this trait evokes one of the medusa’s iconic features—her hair of poisonous snakes. Apply this trait to traps that resemble serpents for maximum dramatic effect.

Poisonous (poison)
When this trap hits with an attack, target takes ongoing 5 poison damage/tier (save ends). In addition, the target suffers one of the following effects while they are taking ongoing damage (choose or determine randomly):
1—dazed
2—knocked prone
3—blinded
4—weakened

The kissing maiden cracks the templar’s helmet, sending him to the floor. He shudders beneath his armor, and grey mist swirls through the broken links of his mail into the trap’s skull-shaped hammer.

This deadly power echoes the demilich’s most fearsome ability—capturing the spirits of the living.

Poison courses through your veins, but it does not harm you. However, those near to you recoil from the venom, sickened by your very touch.

Use traps that have this power to target clerics, fighters, and other heroes that walk among their friends during battle.

Venomous Gift Recharge 4, 5, 6
Trigger—The trap hits a living creature with a melee attack.
Effect (Immediate Reaction)—The target gains resist 5 poison/tier (save ends). However, whenever an ally ends their turn adjacent to the target, that ally takes 5 poison damage/tier and grants combat advantage until the start of their next turn.

The following sample trap was made by applying the petrifying trait and the death howl and venomous gift powers to the pendulum scythes trap.

STANDARD ACTIONS
[m] Attack At-Will
Attack—Melee 0 (each creature in a random row of squares); +9 vs. AC.
Hit—1d10+2 damage and ongoing 5 damage (save ends). In addition, the blade pushes the target 1 square and knocks it prone. (See also petrifying.)

Venomous Gift Recharge 4, 5, 6
Trigger—The trap hits a living creature.
Effect (Immediate Reaction)—The target gains resist 5 poison (save ends). However, whenever an ally ends their turn adjacent to the target, that ally takes 5 poison damage and grants combat advantage until the start of their next turn.

9 thoughts on “Trap Themes (Part 5 of 5): Tricks of the Medusa Demilich”