Skip to content
Home / Delve into the Depths in the Kobold Blog / Monday Monsters: Candle Drake 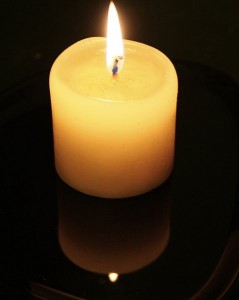 Brother Fandrus rubbed his eyes. Scribing books by candlelight took its toll. He stepped outside his cloister to get some fresh air. The sight greeting him when he returned made him gasp: a small dragon with waxy wings contentedly munching on the candle Brother Fandrus had been using. Even more remarkable, the room’s illumination had increased thanks to the light emanating from the dragon’s tail.

Tail Wick (Sp) A candle drake can use spell-like abilities from its tail wick. Its wick has a number of uses per day (assuming the drake has sufficient candles to feed on) equal to 2 times the creature’s HD, and it emanates continual flame at no cost. The continual flame can be dispelled, but the drake may take a swift action to resume it except in areas of magical darkness. Each ability consumes the dragon’s wick at a rate of 1 use per spell level (0-level spells count as 1 use). The following spells are cast at CL 3rd, and save DCs are Intelligence-based: burning hands, color spray (DC 14), flare (DC 13), hypnotic pattern (DC 15), pyrotechnics (DC 15), scorching ray.

Vulnerable to Magical Darkness (Ex) A candle drake in an area of magical darkness loses its tail wick ability and its ability to fly. It also takes 1 Con damage for every minute of exposure.

The creature boasts waxy, pale yellow scales, which darken as the drake gets older. Its tail ends in what appears to be a flaming tuft of hair. A candle drake weighs 10 lb., its body is 18 in. long, and its tail adds another 8 in. The tail grows as the dragon ages, and it shrinks as the creature uses its abilities. The drake requires 4 ounces of candles per day and 4 more ounces for each use of its tail wick.

A candle drake’s unusual diet leads it to lair in libraries, abbeys, and other places of study. Even though the dragons eat candles essential for study, they still provide light and protect their adopted homes. Residents and caretakers regard them as good luck and enjoy conversing with them.

The gregarious drake prefers to speak with its companions but uses telepathy if it encounters a language barrier, and the creature hisses when surprised or displeased. It loves nothing more than discussing magic and history with an intelligent and informed individual.

Occasionally, the creature sets out with an adventuring party, so it can learn more ancient lore. Most parties enjoy the travelling light source and the abilities these companions bring to bear. A candle drake tries to avoid combat and uses its abilities only to escape or to defend its lair, family, and friends.

A candle drake lives anywhere from 5 years to several decades, depending on how successfully they avoid mercenary spellcasters who hunt the drakes to use as raw components for magical candles. A mated pair produces one clutch of 2-5 eggs every 5 years, and one parent raises the young drakes until they reach maturity at a year and leave to search for their own lairs. A cloister of drakes taxes its lair’s resources, so the other parent, typically the creature prone to wanderlust, ventures out to retrieve more candles.

A candle drake wishing to learn more about the world finds a spellcaster with which it can travel. A character having an arcane spellcaster level of at least 7th and the Improved Familiar feat can take a drake as a familiar, subject to the feat’s restrictions.

Q: Why did the night watchman arrest the candle drake?
A: Its tail light was out.

Tell me a joke.