Skip to content
Home / Delve into the Depths in the Kobold Blog / Monday Monster: the Simurgh

In ancient days when man was young, Angha soared on desert winds. Blocking out the sun as she passed with feathers like copper fire, she engendered fear and awe in the primitive civilizations of man and quickly became an object of worship. Though never asking for their exaltation, a rare and fleeting sense of obligation would tie her forever to these people.

Angha had already lived forever. She had seen the birth of the world over and over and understood cyclical nature of time well enough to have lived “ever since tomorrow.” With the knowledge of the ages and a second sight, she guided early civilizations on their paths to greatness from afar.

It was not to last. [More…] The serpent Dahag stoked jealousy and fear among the people, and so finally bested his foe Angha. Dahag’s followers trapped Angha and put her to the flame, but in her burning death throes, she slew all of Dahag’s followers. As Angha lay dying with the fire consuming her body, the smoke and flames took on their own life. The tendrils of smoke coalesced into ravens, and the licks of flame into the simurgh.

While the ravens dispersed to the world, the simurgh stayed near their desert birthplace. They are heavy, slow birds and are unable to travel very far in flight. Though simurgh come across as clumsy and even foolish, they hide the memories of Angha within. All simurgh keep and remember this knowledge of ages past from the matriarch of their kind. Each is born with Angha’s knowledge and second sight, and occasionally, they use their abilities to help others.

TACTICS
During Combat Simurgh will shy away from most uninitiated fights. If called upon to defend itself, a simurgh will prepare itself using spells if it has the time. Otherwise, it will try to disperse parties of creatures using spells and song, and then, it will focus its melee attacks on a single foe at a time.
Morale A simurgh only fights when necessary and will flee if reduced to half its full hit points.

SPECIAL ABILITIES
Memories of Angha (Ex) All simurgh are born with the experiential knowledge of Angha. This provides the simurgh with a +8 racial bonus on all Knowledge checks. Additionally, a simurgh gains the bardic knowledge ability of a 10th level bard and can understand and speak any language as tongues.
Omen (Su) Any creature damaged by a simurgh’s bite attack must make a Will save of DC 25 (10 + ½ HD + Cha modifier) or be dazed for 1d4 rounds while suffering from a vision. A creature having a vision sees a snapshot of time—from either the past or the future—that preoccupies their thoughts; the vision may or may not have anything to do with the affected creature. This is a mind-affecting ability.
Second Sight of Angha (Ex) Whether due to a level of prescience or to the knowledge passed down by Angha, a simurgh often predicts actions before they occur or, simply, already knows what will happen. A simurgh is never surprised or flat-footed, has a +2 insight bonus on attacks, and has a +10 insight bonus to AC.
Song of the Simurgh (Su) A simurgh has a large, sharp beak, and the top portion houses a complex array of porous capillaries leading to 30 holes on the outer surface of the beak. Due to the specialized musculature in its jaw, a simurgh can control the flow of air out of these holes during respiration, so that it can effectively use its beak as a sort of flute. In this way, a simurgh has the bardic music ability of a 10th level bard. It may use any combination of the following abilities 10 times per day: countersong, fascinate, inspire courage +2, suggestion, and inspire greatness.
A simurgh’s song can be heard at great distance, and the simurgh can affect creatures up to a mile away with its bardic music abilities (this also applies to the spell-like effects of fascination and suggestion). Targets closest to the source of music are affected first. Using its bardic music does not prohibit bite attacks.
Spells (Sp) A simurgh has the spell-casting abilities of a 10th level bard.

The simurgh resemble giant dodo birds, though they have large wings and can fly; however, its bulk certainly slows it down. Despite this bulk, the simurgh remain much lighter than they appear due to the hollow bones common to birds. The feathers of a simurgh are a vibrant mixture of reds, oranges, and yellows. The beak of a simurgh is large and sharp, and its surface is riddled with runnels; no two simurgh beaks have an identical beak pattern.

Ecology
Simurgh typically nest in mountainous desert regions where they are far away from prying eyes and difficult to access except by air. When hunting, they utilize their musical talent to fascinate nearby creatures and draw them near. Except when hunting, simurgh spend most of their time in their nests where they play there music to communicate to nearby sisters and to entertain themselves.

Habitat & Society
All simurgh are female. They lay eggs, which hatch into clones of the mother. It is thought that every simurgh existing today is an exact replica of the original simurgh spawned from Angha and that this is somehow related to how they pass on their knowledge. Simurgh are private creatures and nest as individuals while maintaining a respectful distance from one another. However, they are never farther away from their closest sister than the distance their song can travel.

Great pains are taken to nest far from the lands of other sentients for fear of constant harassment. In the past, vast pilgrimages of sentient creatures have sought out the simurgh in order to bargain for their knowledge. Some have been known to intentionally provoke a simurgh in order to gain a vision, which is considered a holy experience. While some simurgh suffer others more readily and even enjoy the occasional diversion it provides, most are happy to be left alone with their song.

Relations
Though difficult to tell, the simurgh are distantly related to ravens. Legends claim that the original ravens were of similar intelligence to simurgh, but as the generations went by for the ravens, their intelligence dwindled to its modern level. Some believe that there exists a council of elders at the very highest levels of raven hierarchy that, by means of life-preserving magics, are separated by far fewer generations than their brethren are and, thus, are much closer in intelligence to the ravens of legend. While most of this elder council of ravens is friendly (or at least indifferent) toward the simurgh, there are a few members that harbor a deep resentment toward their distant cousins.

Folklore
The simurgh originates in Persian mythology. It has enjoyed a variety of incarnations ranging from being fully birdlike to having the head of a dog and suckling its young.

Typically, it is considered benevolent, but some tales suggest that man is not always safe around the simurgh. Further, many tales share many elements with those of the phoenix. 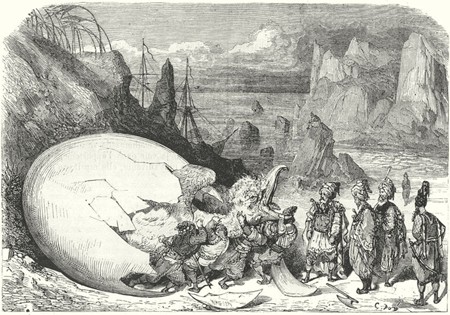 Want more desert monsters for the Legacy of Fire Adventure Path? See the official Pathfinder monsters in Kobold Quarterly #7, or discuss them in the KQ Forum.

1 thought on “Monday Monster: the Simurgh”