Skip to content
Home / Delve into the Depths in the Kobold Blog / Secret Lairs: The Snow Star Cavern 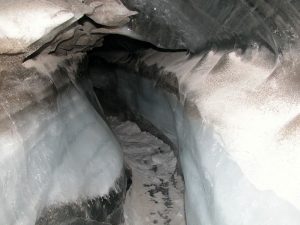 Amid the wild snows, a tempting light shines, luring the lost or frightened to safety. Stumbling and numb with cold, these poor wanderers find a warm, inviting cave mouth at the source of the light.

The brightness is obscured and then disappears entirely as the wanderer seeks shelter. Standing at the cave’s mouth, one feels an eager pulling, often confused with the allure of simple warmth. Once entered, the cave mouth sinks into the ground and appears elsewhere, never in the same spot twice.

Inside is a tunnel of solid ice, pulsing with veiny fingers of light. Within, the pulling sensation grows stronger, pulling intruders down the tunnel to the cavern’s heart…

The heart of the cavern is a circular hollow carved from ice, nearly 50 ft. in diameter. At the center floats a snowflake shape crafted from flame—the Snow Star.

Those that enter are devoured by the cavern’s Keeper, eternal servant to the long-dead sorcerer who created the Snow Star and its home. The Keeper does not communicate and attacks all intruders without pause.

Combat in the Snow Star Cavern

The tunnel is 3 squares wide and 15 squares long; the central cavern is a circular chamber with a diameter of 10 squares. The cavern’s only features are the Snow Star, the Keeper, and a few shattered remnants of bone.

Once combat begins, the environment is a prominent factor on the otherwise stark battlefield.

Effect: The entrance to the Snow Star Caverns moves, and the location of the caverns themselves is unknown. A character entering the caverns never exits them in the same place. The cavern’s mouth always appears in areas surrounded by snow and rarely “travels” more than a few miles in a day.

The Snow Star: Both effects end if the Snow Star is destroyed. If it is destroyed (AC/Reflex 10, Fortitude 5; HP 15), all creatures present are shunted to the place the mouth last appeared.

Requirement: You must be adjacent to the cavern wall.
Check: Athletics check (moderate DC) to kick or slam the tunnel wall hard enough to make a crack.
Success: Surging veins of light burst from the cavern walls, dizzying and confusing those nearby, including you.

Made from the same magics as the object it guards, the Keeper resembles a giant, crystalline ape. Its eyes and teeth are raging fires, out of proportion with the rest of its body. Its bulky arms end in razor claws of ice.

MINOR ACTIONS
[R] Snow’s Entrapment (cold, teleportation) • Recharge when Keeper hits with fury of the star
Attack—Ranged 10 (one creature); +12 vs. Will.
Hit—Target is teleported 5 squares and is slowed until the end of its next turn.