Skip to content
Home / Delve into the Depths in the Kobold Blog / Midgard Preview: Skincrawler Dragon 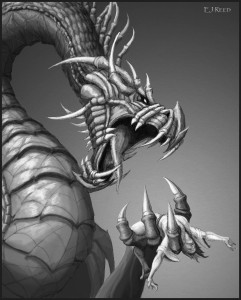 Millions of shadow spiders crawl under this dragon’s translucent scales, pigmenting its pale gray flesh like shifting black sand snaking across its wasted frame. The dragon’s diaphanous wings sweep back from its shoulders to its withered forked tail. Its lips, permanently withdrawn from its toothy maw, snarl with menace, and a palpable hunger emanates from the bony-faced creature’s deep-set spider eyes.

Skincrawler dragons are aggressive reptilian beasts with natures more akin to wyverns than chromatic dragons. Territorial and insatiably hungry, the skincrawler attacks with proven tactics and decisive strikes. For those unfortunate enough to wander into its 200- square-mile hunting grounds, the horror has just begun.

A wave of fear precedes this nightmare beast when it wings down from twilight skies. Its gossamer wings stretch, and the ground shakes with the impact of its landing. From afar, its skin appears to shift in shadowy darkness across its flanks. A closer look reveals the writhing motion of a million spiders cavorting under its scales. More spiders crawl over its eyes and pile in its mouth as it unleashes a roar that unhinges its jaw.

The skincrawler’s strategy is simple: employ its vampiric breath weapon and fight until it can fly away with at least one dying victim. If the battle goes poorly, the skincrawler retreats, returning to the scene later with a burning vengeance and the maximum complement of temporary hit points. More often, the skincrawler takes its prey with ease. Peasants and heroes have watched helplessly as the skincrawler takes to the skies with a family member or comrade in its spider-swarm maw.
Skincrawlers lair in remote, difficult-to-reach locations, such as mountaintop caves. Instead of hoarding treasure, skincrawlers stockpile bodies. People, horses, harpies, and hags all lie together in a mangled mass of limbs and wide-eyed faces. Most are conscious but paralyzed by the dragon’s slow feed ability. Some have been here for months. Each horror-stricken face breathes with the slow asthmatic gasp of a moray eel, sucking air past spiders crawling from its throat. This pile, the skincrawler’s larder, is the horrific fate of every dying creature it secures to its lair.

When a crippled or detained skincrawler does not return to its lair on schedule, its hoarded victims sometimes overcome their paralysis, finding themselves lying helpless in a heaped menagerie of other victims. Climbing out of the pile, they learn hundreds of miles of wilderness surround their cave entrance. For those still sane, a perilous descent and uncertain journey awaits. For the insane, only maddened laughter ever escapes the lair of the skincrawler.

To prevent its hoard from escaping or throwing themselves to their own death, some skincrawlers employ “tenders” to keep the dragon’s victims bound or unconscious until the dragon returns. The tender also waters the victims daily and force-feeds them a slurry of regurgitated horseflesh and dragon bile. Weak-minded, sentient creatures make the best tenders.

Read all the recent Midgard posts, or pick up the Midgard Bestiary today!