Skip to content
Home / Delve into the Depths in the Kobold Blog / Fadin’s Fuming Forge: A Haunt 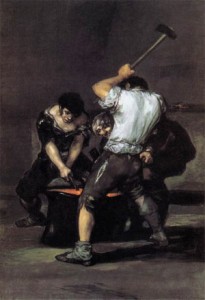 Fadin expertly judged the color of the steel as its hue gradually shifted from deep red, to orange, and then to a pale yellow in his forge. At a precisely timed moment, he removed it with a set of tongs and brought it over to his anvil. He nodded to his apprentice, who generously showered the metal with star dust, the crushed remains of a meteor. Fadin hammered the dust deep into the metal bar before attempting a fold. Once more, he returned the metal to the forge to reheat it.

They repeated the process two more times before they had to stop for the day. Daylight was fading and both Fadin and his apprentice, Ghannes, were tired from the work. Fadin eyed the bar of metal as the heat fled from it. Tomorrow they would finish the work. Together they would create a legendary blade, something every smith dreamed of.

Fadin woke feeling tired, and as he and Ghannes broke their fast together, he couldn’t but help notice how pale the boy looked. Together they headed to the smithy but never made it there. Ghannes threw up his breakfast and more. Bloody spittle covered his mouth as the boy retched repeatedly. Fadin took the boy to the local healer before returning to his forge. Today would be the day that he finished the blade. Removing the fate of the boy from his thoughts, Fadin fired up the forge and shoved the metal deep into the flames. All day Fadin worked the forge, hammering and reheating as the metal bar took on the shape of a sword. Pleased with the result, Fadin thrust the finished blade deep into water to harden it. Clouds of steam rose from the water and then a terrible crack echoed throughout the area as the blade shattered.

Fadin was found dead, near a neat pile of shattered metal pieces. Small lacerations covered Fadin’s body, but the healer determined that they were not deep enough to have killed him. Ghannes never recovered from his illness—it consumed him within a few days. The smithy was sold and things returned to normal until the new blacksmith received a commission to create a blade. The blacksmith was found dead, slumped over his anvil, the commissioned blade lying, half finished on the ground. Since then the smithy is considered haunted and now stands derelict.

Fadin’s Fuming Forge         CR 5
XP 1,600
LE haunt (25-ft.-diameter area)
Caster Level 5th
Notice Perception DC 20 (to hear the faint crackling of flames and metal striking metal)
hp 10; Trigger proximity; Reset 1 week
Effect The haunt triggers whenever anyone nears the smithy’s forge. The forge springs to life with roaring flames and poisonous fumes flow from it. All creatures in the area of effect are targeted by a cloudkill spell (partial DC 17 Fortitude save); the cloud disappears after 1 round.
Destruction The haunt can be destroyed by rounding up all the shards of Fadin’s shattered blade, which were turned into nails by the unfortunate blacksmith that bought the smithy. The nails must be forged into a blade.

About the Author
Maurice de Mare, trapsmith, hauntsmith, and sometime freelancer, would like to thank Todd Gdula for showing him the dangers of chromium and zinc.