Skip to content
Home / Delve into the Depths in the Kobold Blog / Midgard Icons: The Glittering King 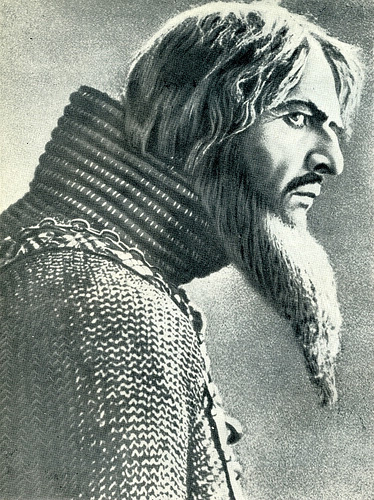 In our seventh installment, we travel to the Despotate of the Ruby Sea, a decadent kingdom of cruel aristocrats and demon ships,  to meet its pitiless ruler…

The Glittering King is steeped in luxury and wine: a paranoid drunkard with a great temper and tremendous power over his terrified nobles. His mastery of dark magic and fleet of demon ships makes his slave kingdom into a force that few dare challenge.

“Ahh. I see that you recognize the one who stands guard at my side. I would have him greet his old friends properly, but I’m afraid  he is not much of a conversationalist these days.”

Within his jeweled palace at Reth-Saal, or aboard his demon flagship the Golden Bird.

The name of Veltrin the Younger, Glittering King and Despot of the Ruby Sea,  is lavished with fawning praise within his kingdom but is a curse among the free folk of the Rothenian Plains. His subjects are debauched and sadistic slavers who will sell to anyone: the gnomes, the tsar, the priests of Baal, and even to the Ghoul Emperor.

By offering blood sacrifices to the White Goddess, the Glittering King can create an army of fearsome proportions in a matter of days, magically turning his slaves into monstrous, bloodthirsty warriors. These warriors all die a short time later, but the King considers his own safety and well-being worth the cost.

In recent years, the Glittering King has taken to wearing a mithral mask studded with sapphires, rubies, and chalcedony. He raids his neighbors with increasing regularity, and his grip on the Despotate tightens even as its debauchery grows wilder.

The Glittering King and his wealthy, decadent nobles crave wealth and power. They often hire mercenaries to seek after hidden treasure, powerful items of black magic, or information that will ensure victory in an upcoming raid. Only the vilest creatures willingly serve such masters.

The Glittering King pays “loyal” tribute to the Dragon Sultana because hers is the only nation that could crush him. Baba Yaga’s daughter Eldara is a favorite in his court, and he enjoys a highly profitable trade selling slaves to the Ghoul Emperor and the Gnome King.

First Duke-Admiral Cadua of Triolo would happily end the Glittering King’s life with a sweep of his axe, and sail back to Triolo with the Despot’s head nailed to the prow.

The slaving fleet of the Rubeshi is widely feared, and the secret of its success is its flagship, the Golden Bird. The figurehead at its prow is a bound demon named Yarochort, a horrific figure draped in rusty chains.

Veltrin the Elder, the Glittering King’s father,  found the figurehead in a wreck washed ashore. He had no idea how to command it, so he learned the secrets of binding and controlling demons from Baba Yaga and the Master of Demon Mountain. Thus empowered, Veltrin and his single pirate ship took  slaves by the score.

Hungry to become more than just another pirate captain, he began to assemble an entire fleet and put those slaves whom he did not sell to work laying the foundation stones of the city of Reth-Saal. Those who could not work were fed to demons. When Veltrin the Elder died, his son inherited all and became the Glittering King.

During the Boyar’s Rebellion, a dozen of the Glittering King’s ship captains and one of his generals plotted to murder him. The Glittering King executed the plotters, then stitched their bodies into the first of the Elect: 50 flesh golems who serve as his bodyguards. Creating them took years and a fortune, but seeing former generals and powerful galley commanders jump at his every word amuses the Glittering King still, and terrifies his enemies. No coup has been attempted since.

Everything will be all right as long as the Dragon Sultana can keep the Glittering King’s depredations in check.

Photo: Chaliapin F. as Ivan the Terrible in Rimsky-Korsakov’s The Maid of Pskov, via Wikimedia Commons