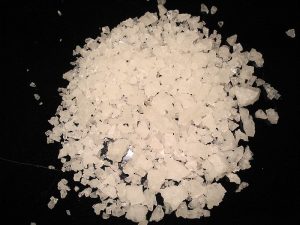 This crystalline automaton is crudely sculpted, with only the vaguest humanoid features. As it shuffles forward on wide, stump-like feet, thousands of tiny salt crystals fall from its body, creating a glittering cloud.

A salt golem has a crudely formed humanoid body made of crystalline salts. It wears no clothing or armor and carries no weapons or other possessions. It cannot speak; the only sound it makes is the susurrus of sliding sand as it moves. A salt golem stands about 8 ft. tall and weighs around 1,000 lb…

TACTICS
During Combat A salt golem is incapable of strategy or tactics. It mindlessly fights until it destroys its opponents or until ordered to stop by its creator.

ECOLOGY
Environment any
Organization solitary or gang (2-4)
Treasure none

SPECIAL ABILITIES
Blinding Salt Spray (Ex) Any time a salt golem is hit in combat, thousands of tiny salt crystals erupt from its body. All creatures within 5 ft. of the golem are blinded for 1d6 rounds (Reflex DC 16 negates; Constitution-based).

Immune to Magic (Ex) A salt golem is immune to any spell or spell-like ability that allows SR. In addition, certain spells and effects function differently against the creature, as noted below.

Rusting Grasp (Su) A salt golem can make a melee touch attack with a rusting grasp effect, as the spell, 3/day.

You can find another of Rob McCreary’s monster variations in Monster Chronicles: The Nightmare.