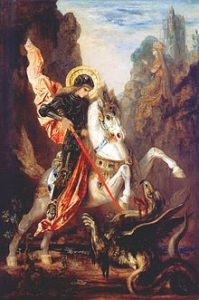 Dragons are the most iconic creatures in fantasy RPGs, for obvious reasons. They ought to be among the most impressive and frightening, too, but that isn’t always the case. It’s not because dragons don’t have the chops; on a stat-by-stat basis, your average dragon is terrifying. Yet player characters bring them down with shocking regularity.

How can that be? I blame two popular fancies, both of which are variations of namby-pambyism.

First is the notion that, because dragons are iconic, it’s a shame to make players wait until their characters reach high level before fighting one. Wouldn’t it be more fun if PCs could tackle a dragon at low level? Hence we get “heroes” killing baby dragons and bragging about it. St. George looks sort of cruel in many depictions, lancing a dragon that’s dwarfed by his horse. Now, even a baby dragon can be a tough foe, and a creature that’s guaranteed to grow up into a fire-belching murder machine ought to be fair game at any age, for the good of civilization. But from a heroism angle, it smacks of tying a pig to a post and letting children shoot it for fun while pretending they’re hunting wild boar. It demeans the participants and erodes respect for a creature that deserves a healthy measure of esteem, whether it’s a feral razorback or a majestic wyrm.

Second is the misplaced idea that fights ought to be fair. Fairness has nothing to do with it. The #1 concern of warriors who engage in fights to the death should be wangling matchups that are as unfair as possible, in their favor. A dragon that doesn’t use every advantage the Monster Manual or Bestiary allows against would-be dragon slayers is a poor excuse for a behemoth.

Of course, when I criticize feeble dragons, I’m really pointing a finger at DMs.

The biggest offense here is grounding dragons rather than keeping them aloft. Dragons are meant to soar majestically with widespread wings, swooping earthward only to unleash fiery doom on puny humans. This is what dragons do; it’s their signature move, their raison d’etre, their unblockable leaping crane attack, the nut punch that makes them dragons. Why would any dragon be so foolish as to give up its best defense and plant itself where it can be backstabbed by halflings with knives?

Because DMs want the fight to be fair, that’s why. They want every character to participate equally, even characters who literally bring a knife to a firefight. Not to put too fine a point on it, but . . .

No, let me put a very fine point on it. This is the height of ridiculousness. It’s gimme game mastering and PC entitlement run amok. It’s disrespectful to players, because it assumes that they can’t think their way through a problem and won’t enjoy themselves if they’re asked to.

That’s not to say PCs shouldn’t fight dragons on the ground, because they should, absolutely. That’s the only way smart heroes will engage a dragon. But the dragon should be grounded because characters forced it into a deadly corner, not because it chose to commit suicide.

How do you force a dragon to fight on your terms? That’s the $64,000 question. Anyone who picks a fight with a dragon had better have an answer. Ambushing the beast in a cave or in roofed-over ruins is a top contender, since dragons seem to like having a roof overhead when napping. Crippling its wings with long-range attacks is an option, though a dangerous one if it fails. Drugging the dragon somehow is an interesting possibility—several buckets of sleep potions in its water supply might do the trick.

The point is that the burden of gaining the upper hand against a powerful foe such as a dragon falls on players, not the DM. A dragon is the Kobayashi Maru of fantasy RPGs—the game is rigged 100% against the heroes. The only way to win is to change the rules. That’s a real test of resourcefulness and a worthy challenge for true heroes.