Skip to content
Home / Delve into the Depths in the Kobold Blog / Midgard Expanded: The Travels of Lucano Volpe, or On the Road to Mharoti 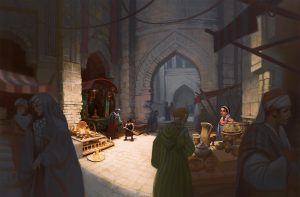 Part Two, Qiresh and the Roads of the Mharoti Empire

On the coast of the Ruby Sea is the town of Qiresh, which is a bustling centre of trade. You may depend on it that spices and cloths and all manner of valuable things from the interior are carried to this town. Qiresh possesses a sheltered harbor flanked by high cliff walls, and it is upon these cliffs that the town itself resides. It boasts the great Ringing Temple, the second-greatest shrine to Azuran—a cliffside place known afar for hurling sacrifices into the Ruby Sea. The engineers of the empire have cleverly cut away terraces into the stone, so Qiresh seems to rise up from the harbor in gigantic steps. Merchants dock here from across the Ruby and Middle Seas to buy goods. Those wishing to reach the eastern provinces of the Mharoti Empire would do well to begin their journey in this place.

I shall tell you, there are three types of people in the empire, and life there is structured into castes, so each might know their proper place. At the highest are the dragon lords, the Morza, who answer only to the Sultana herself and each other. Below them are the other dragons, the Urmanli and Timarli castes, who are all important nobles, dukes, generals, and priests. Then comes the Akinji, Edjet, and Sekban castes formed almost completely by the humanoid dragonkin. Even the lowly kobolds have a caste, the Kobaldi, and are full citizens of the empire. Lowest of the low are the Jambuka or “Jackals” made up unfortunately of everyone else including myself. Thus, my time in Qiresh was marked not by polite welcome but by indifference and even cool disdain. I was quite glad to make my exit from that place. 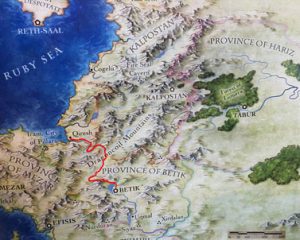 Though our destination, the city of Tabur, lay to the East, Agosto and I joined a caravan heading southwest toward the provincial capital of Betik. Our detour was due to the inhospitable nature of the Dragoncoil Mountains. It happened in this way. On the night before our departure, Agosto brought to me a Nurian named Samad who told us chilling tales of the Dragoncoil. For it is there that many dragons make their lairs and guard them fiercely, descending upon any who travel near to them. But the trade road to Betik remains unmolested by the great drakes. And from there, we learned, one can travel upon a lesser trail to Tabur. Now, let us leave Qiresh and speak briefly of the roads of the empire.

Betik lays some five hundred miles from Qiresh, and the trade road to Betik takes some seventeen days to travel. There are many villages along the way, and all manner of game is available in great abundance. Even so, I tell you it is not a welcoming place for humans. On the contrary, it is exceedingly rude. The citizens of the empire treat foreign travelers as if they were some sort of illness to be endured but not interacted with.

For the elucidation of my readers, I shall describe two helpful spells I collected during my travels in the empire.

You emanate an aura that repels minor vermin and pests. This spell has no effect on any creature possessing a CR level and, thus, no effect in combat. It is designed to push away irritating insects, bedbugs, and the like.

This spell creates an orb of brightly glowing light that launches from your hands. You need not have line of sight to your target, but you must have a line of effect. When it lands, the orb provides illumination equal to twice that of normal torchlight.

3 thoughts on “Midgard Expanded: The Travels of Lucano Volpe, or On the Road to Mharoti”